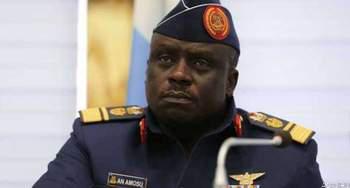 The Federal High Court in Lagos has ordered the temporary forfeiture of N2.2billion recovered from a former Chief of Air Staff, Air Marshal Adesola Amosu. Justice Mojisola Olatoregun made the order after listening to an ex-parte application brought before her by the Economic and Financial Crimes Commission (EFCC).

The judge held that “An interim order is made forfeiting to the Federal Government of Nigeria the total sum of N2,244,500,000 found and recovered by the commission from the first respondent (Amosu) which sum is reasonably suspected to be proceeds of unlawful activity.”

The judge also granted an interim order for the temporary forfeiture of another N190,828,978.15 recovered from a former Nigeria Air Force Director of Finance and Budget, Air Commodore Olugbenga Gbadebo, and another N101 million recovered from Solomon Enterprises, a company linked to Amosu. The EFCC told the judge that the various sums were “reasonably suspected to be proceeds of unlawful activity.”