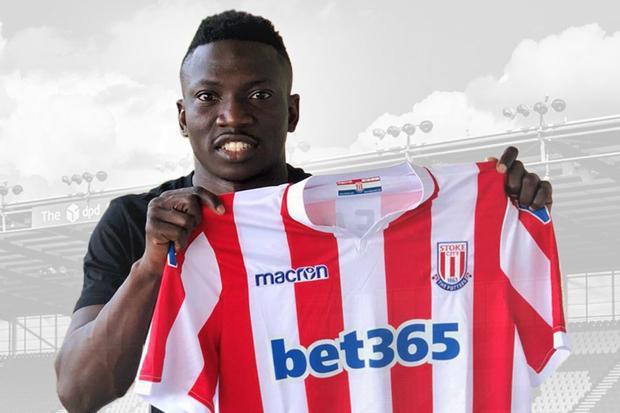 Stoke City have completed the signing of Oghenekaro Etebo on a five-year deal from Feirense.

The Potters paid the Portuguese side €7.2million for the services of the versatile midfielder, set to represent Nigeria at the 2018 Fifa World Cup in Russia.

Etebo joined Las Palmas on loan for the second half of the 2017-18 season where he made 14 league appearances in the Spanish LaLiga.

The Super Eagle joined Feirense from Warri Wolves in 2016 and made 45 league appearances with seven goals to his name.

Newly appointed manager Gary Rowett has expressed happiness with the club’s first signing of the summer.

“We’re really excited to have got the deal over the line for Etebo. I’m looking forward to seeing him in a Stoke City shirt as I’m sure our supporters are too,” Rowett told club website.

Etebo will join the Potters in preparing for life in the English Championship, immediately after Nigeria’s campaign at the World Cup.

And club chief executive Tony Scholes is pleased with the midfielder’s decision to join the Championship side amid chases from English top-flight and German Bundesliga outfits.

“We are delighted Etebo has chosen to join Stoke City, becoming our first signing of the summer,” Scholes told club website.

“I’m particularly pleased that he took the time to look beyond our current league status and understand who we are as a club before choosing us ahead of current Premier League and Bundesliga clubs.”