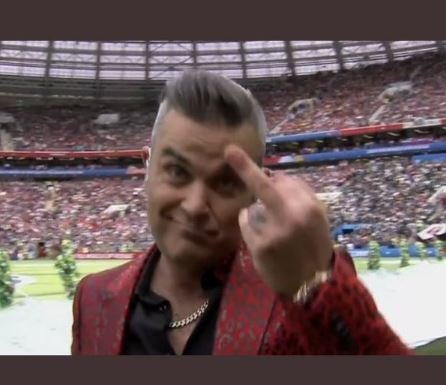 English singer and songwriter, Robbie Williams performed at the World Cup opening ceremony in Russia a few minutes ago.

During his performance, he randomly gave ‘the world’ the middle finger and its sparking hilarious reactions on social media.

The World Cup Opening Ceremony was viewed by an estimated one billion people!

Robbie Williams just showed his middle finger right in front of the camera. Right, this World Cup is absolutely gonna be lit af.#WorldCup

Turned on FOX just in time to see Robbie Williams give the middle finger to be worldwide audience. God, I love the World Cup.

Yes. Robbie Williams did just stick his middle finger up at billions of people watching around the world. ?#WorldCupRussia2018 pic.twitter.com/vcbTuQl3Lu

Robbie Williams is such a melt showing his middle finger! ? #WorldCupRussia2018 #WorldCup pic.twitter.com/klqg7smwgd

Can’t believe Robbie Williams stuck his middle finger up at millions of people watching the World Cup, can you even be arsed ?? pic.twitter.com/Bt1A50ghyM

Being your wife is so peaceful – Actress Ruth Kadiri pens romantic message to...

Adedokun Moses - November 6, 2020 0
Veteran Nollywood actress and filmmaker, Ruth Kadiri have taken to social media to celebrate her wedding anniversary with her husband, Mr. Ezerika, whom she...

Adedokun Moses - January 7, 2020 0
Fast rising singer and songwriter, Zlatan Ibile is starting 2020 with another master piece as he release his new single 'Quilux'. The song which was...