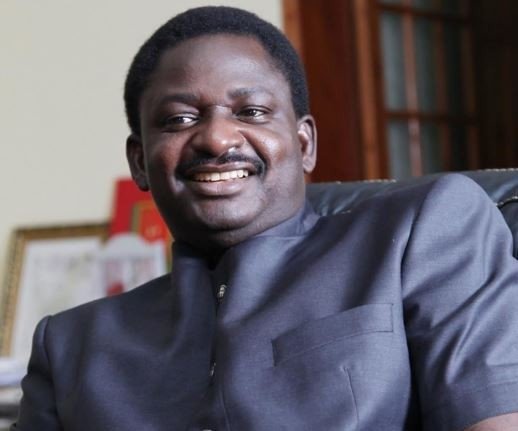 President Buhari’s special adviser on media and publicity, Femi Adesina who is currently in China has just shared how the Asian country took 700 million of its people out of poverty.

According to Adesina, ‘in the 1950s-1970s, China was just like Nigeria. Its situation was just like the ashes from which President Muhammadu Buhari is trying to take the country from today. No electricity, the best form of transportation on the waters were rafts, take-home pay could not take the workers home, and the people were in distress, forlorn and disconsolate. No clean water for domestic use, the country could barely feed its burgeoning population, social welfare was almost nil. It was the Hobbesian state of nature. Life was nasty, brutish and short’.

Read his full piece below…

The ruling Communist Party of China (CPC) has a target by 2020: to ensure that what is called ‘population poverty’ is eradicated in the country of 1.3 billion people. And it means business, as between 1978 when the country embarked on reforms, and now, over 700 million people have been taken out of grinding poverty.

Bidding farewell to poverty is not just a pie in the sky for China, which can only be eyed longingly, but which the mouth will never touch. It is putting its money where its mouth is, with the political leadership working strenuously for the people.

If you fail to plan, you plan to fail, goes a popular saying. And China is planning, and scrupulously so. It is currently in the 13th cycle of its 5-yearly development plan, which is akin to a roadmap for the country. The goal by 2020 is eradication of crippling poverty.

“Since the reform and opening up, we have carried out large-scale poverty alleviation and development policies, and have successfully lifted 700 million rural people out of poverty,” Professor Li Ping of the Institute of Quantitative and Technical Economics, Chinese Academy of Social Sciences, told us at the ongoing Seminar for National Governance for Presidential Advisers of Developing Countries in Beijing. He added: “Such great achievements add a glorious chapter in the history of anti-poverty. Since the 18th National Congress of the CPC, we have included the poverty alleviation and development work into the ‘four comprehensive’ strategic scheme as the focus of efforts to achieve the first centenary goal.”

In the 1950s-1970s, China was just like Nigeria. Its situation was just like the ashes from which President Muhammadu Buhari is trying to take the country from today. No electricity, the best form of transportation on the waters were rafts, take-home pay could not take the workers home, and the people were in distress, forlorn and disconsolate. No clean water for domestic use, the country could barely feed its burgeoning population, social welfare was almost nil. It was the Hobbesian state of nature. Life was nasty, brutish and short.

Professor HE Wenping of Institute of West African and Asian Studies of Chinese Academy of Social Sciences describes what used to subsist thus: “China, which is now the world’s second biggest economy, used to be very poor. Before you could get married as a man then, you must get three things; a bicycle, which you would ride with your wife, a television set (a whole community may have just one, which they would all gather to watch in an open place), and a sewing machine. That would be used to sew clothes worn by the family.”

Prof Wenping was not talking of medieval times, but of just four decades ago. And then, the leadership caught a vision. It decided to embark on reforms under President Deng Xiaoping, opened up to the rest of the world, and articulated political and economic policies, which have within 40 years (this year) launched China into the second biggest economy worldwide, after the United States of America.

How did China do it?
Presenting a paper titled ‘China’s Political System and Xi Jinping’s Ideas on Governance,’ Prof Wenping submitted: “”Deng Xiaoping pointed out in 1987 that there are three criteria to judge whether or not a political system or policy is suitable or correct for a country, namely; is it beneficial for political stability, beneficial for economic development, and beneficial for the improvement of people’s living standard? If they do, that is a good system and policy. Otherwise, it is not good at all.”

In other words, China had to forge a homegrown political and economic system that was good for its own people. It didn’t copy lock, stock and barrel from other countries far ahead. It recognized that economic development and political stability were intertwined.

President Jinping has built on the vision of his forebears, and articulated ideas on governance, which include; keeping the Chinese Dream alive through hard work and innovation, realizing youthful dreams, and connecting Chinese dreams with the rest of the world by sharing the benefit with other countries.

Others include combating corruption, enhancing China’s cultural soft power by cultivating and disseminating the core socialist values, and peaceful diplomacy with the rest of the world.

On the need for anti-corruption war, Prof Huang Xiaoyong, also of the Chinese Academy of Social Sciences, posited: “We will not stop. We will always do it. That’s the way to ensure fairness in our society. It is difficult to eliminate corruption altogether, but we must never allow it to spin out of control. It destabilizes society and communities. Development is thus affected.”

True. Where are the billions of dollars Nigeria made from oil when the commodity sold at $100 dollars and above per barrel? Vanished! Utterly transmuted. No wonder Nigerians will never allow those who had vandalized the public treasury to return to power, irrespective of half-hearted apologies they’ve rendered. The pathway to sustainable development is the one being trod by President Buhari, and never again will Nigerians entrust the public treasury to rapacious people.

Prof Li Ping concluded his presentation this way: “Making people receive more education is the fundamental way to tackle the issues of chronic poverty and poverty passed from generation to generation.”

Can anybody disagree?
The poverty battle is a war Nigeria must win. It has enough endowments for it. But it is not by returning to the immediate infamous past.