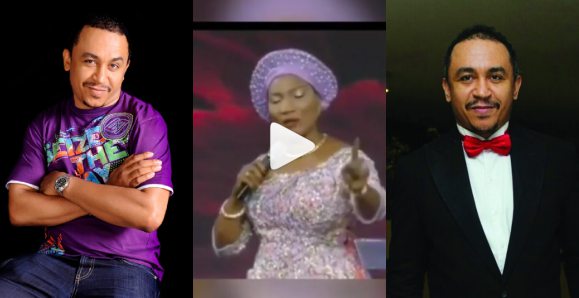 Lagos based On-Air personality, Daddy Freeze has once again taken to his social media space to drop his two cents on religious issues.

The controversial media personality took to his IG page to share the video of a popular female preacher who preached against critiszing men of God.

Freeze, in his caption, referenced Jay Z, who did just that and is is raking in million.

“Not a single bible verse, just more sentiments and emotions, just another theatrical device for the scripturally vapid! Just look at how the cattle are laughing at such an unlettered joke.
–
So to sign millions you must never critisize ‘men of gods’? Jay z insulted TD Jakes and is still signing more millions than your local ass can ever comprehend and you are here speaking native English.”

READ ALSO
Kim Kardashian Is Begging Kanye West to Apologize to Jay-Z,So they can become Friends with the Carter's Again “[Verse 2]
Can’t y’all see that he’s fake, the rap version of T.D. Jakes
Prophesizin’ on your CD’s and tapes
Won’t break you a crumb of the little bit that he makes
And this is with whom you want to place your faith
[Blueprint2 lyrics] ~JayZ
–
Please can someone tell this woman that I’m offering to give her a masterclass in Christianity and on the Bible, so she can stop embarrassing herself like this. Also, join us live at 1pm as I address the points she has raised live on YouTube.com/daddyfreezeteaches”

I’ve lost deals worth millions as an Entrepreneur -Toke Makinwa

Johnson Olumide - May 24, 2018 0
Media personality Toke Makinwa has revealed what being an entrepreneur has taught her. The star who has her own luxury bag line said she...

Johnson Olumide - March 21, 2020 0
Big Brother Naija’s Gifty has been doing the most recently. The mother-of-one decided to forego clothes and underwear in a new photo which she shared...

Serena Williams Named Female Athlete of the Year By AP

Johnson Olumide - February 17, 2020 0
21 times Grand Slam Tennis  Champion, Serena  Williams announced on her instagram that she was Named Female Athlete of the Year By AP. The Sexy, gorgeous Tennis Queen...

Start separating most hyped album from best album – Brymo rants as he claim...

Violette - November 13, 2020 0
Veteran Nigerian singer and songwriter, Ọlawale Ọlọfọrọ, popularly known as Brymo had thrown a shade at artiste who are currently dropping album as he...