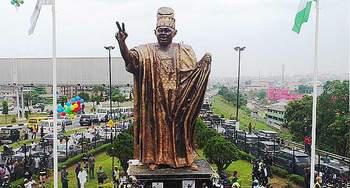 The Lagos State Government on Tuesday, unveiled a statue of the late politician, Moshood Kashimawo Abiola, as part of activities to mark the June 12 celebrations. The date which has remained synonymous with Abiola, following his efforts in the fight for Nigeria’s freedom and democracy, has been celebrated annually across states in the country for the past 25 years.

Described as the freest and fairest election in the nation’s history, this year’s celebration of the day was, however, symbolic. President Muhammadu Buhari officially conferred an award of the Grand Commander of the Federal Republic (GCFR) on the presumed winner of the 1993 presidential election – MKO – while also honouring other heroes of Nigeria’s democratic struggle.

Across some states, the day was marked as a public holiday in memory of Mr Abiola. In Lagos state, a lecture as well as the unveiling of the statue which is situated at the Ojota area of Lagos, were one of the highlights of the celebration.

Violette - February 16, 2021 0
The Nigerian movie industry has been thrown into mourning following the sudden demise of one of it veteran actor, Victor Decker. Nollywood industry has had...

You Don’t See Me In A Car Because I’m Saving To Buy A Jet...

Violette - May 12, 2020 0
Ghanaian actress and television presenter Efia Odo has alerted the public to be in anticipation to see her in private Jet soon as she’s...

Johnson Olumide - April 11, 2018 0
Davido’s babymama,Sophia Momodu showed off her banging beach body in a pink bikini . The mother of one has been chilling out in Miami. Kim Kardashian...

Violette - November 26, 2020 0
Afro-fusion artist, Burna Boy have continue throwing shades on social media as he hail himself as the number one after he made it into...