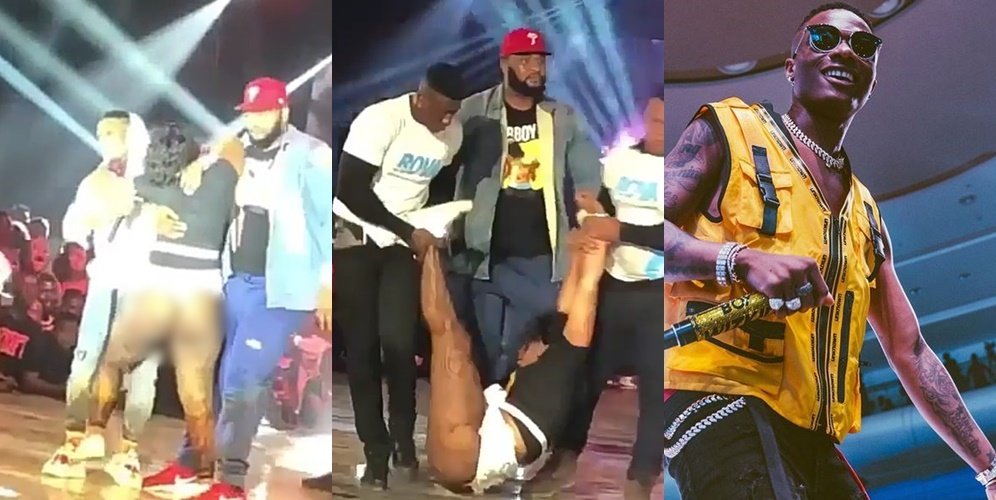 There was a mild drama at GhanaMeetsNaija show yesterday as a Ghanaian lady fainted after hugging Wizkid on stage. The Lady was later carried away from the stage by bouncers.

Meanwhile, Wizkid on Twitter shared his feelings after his successful performance in GhanaMeetsNaija Concert and the love he received from Ghanaians.

Many Ghanaians has congratulated Wizkid on Twitter for making the event lively after some dull performances from other acts.

In the early hours of today Wizkid and Shatta Wale reconciled after Shatta Wale’s infamous ranting on Twitter against Wizkid, Nigerian artists and Nigerians as a whole.

Inside sources revealed Shatta Wale had to beg the GhanaMeetsNaija event boss, Nathan Kwabena Adisi (popularly known as Bola Ray), to allow the reconciliation happen in GhanaMeetsNaija Event after apologizing to Wizkid.

Wizkid was reportedly to have forgiven him and said he had no problems with him or Ghana because of his love for Ghana. According to many it was a “ShowBiz” move by Shatta Wale to get recognition all over Africa since he is barely known outside Ghana.

There are rumors going around that Shatta Wale is planing to feature Wizkid in a soon to be released track and we hope it’ll be dope.

According to many, Shatta Wale got what he was looking for.

Wizkid, who recently made history by headlining a Sold Out Show in O2 Arena, introduced Shatta Wale to the crowd in GhanaMeetsNaija, and said:

“Africa should unite, we have to push together, One Love.”

Meaning beefing won’t help the Africa Industry, we need to unite in order to push Africa To The World. It may be the reason why both him and Davido ended the Childish Beef.