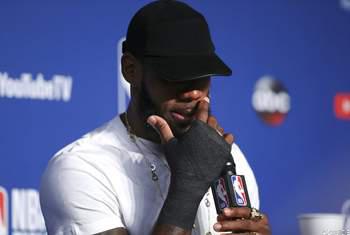 LeBron James says he “pretty much played the last three games with a broken hand” after injuring himself in frustration after Game 1 of the NBA Finals.

James punched a white board following Cleveland’s overtime loss in the opener at Oracle Arena, calling his injury “self-inflicted” after Golden State finished a sweep of the Cavaliers with a 108-85 victory on Friday night.

Watch the confession in the post-match conference:? https://v.duta.us/0Ga9vAAA

James arrived for his postgame news conference with a cast over his right hand.

He says he was upset by some calls that went against the Cavs late in the fourth quarter of their opening loss and he was upset they had missed their chance to win on the road, saying he “let the emotions get the best of me.”

The injury was never disclosed, and James played basically every minute for the rest of the series and put up great numbers.

James scored 23 points in Game 4, his lowest-output game of the series.

“Get Rid of These Tankers And Stop Using Us For Sacrifice” – Yvonne Jegede...

Violette - July 2, 2019 0
Nollywood actress, Yvonne Jegede has joined several other celebrities to react to the Lagos tanker explosion on Otedola bridge, that left over 8 people dead and...

Violette - October 14, 2021 0
A new drama is set to unfold in the entertainment industry as popular actress Dorcas Shola-Fapson calls out fashionista Dabota Lawson for copying her...