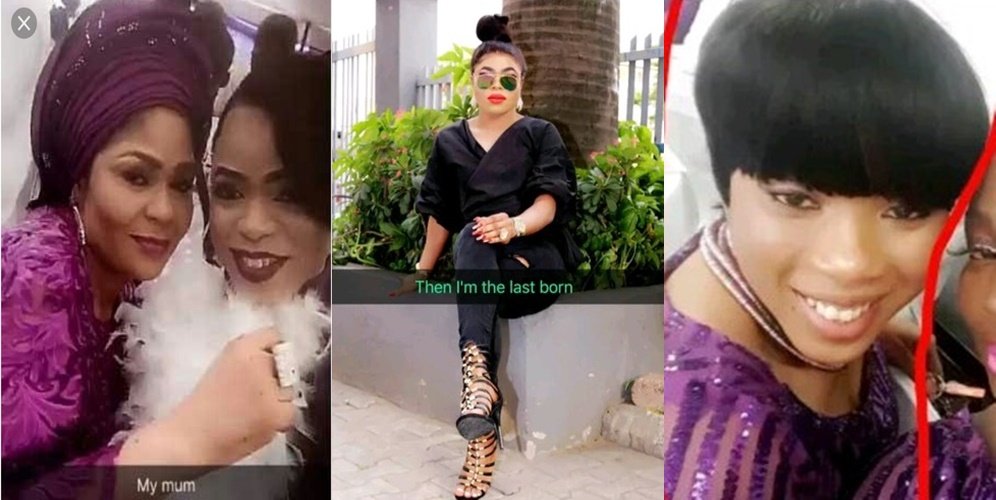 Popular Nigerian Cross dresser, Bobrisky may know just how to court the attention of the media and many Nigerians with his antics on social media but he has managed to keep his private life/ family away from the public eye.

The controversial cross dresser who makes outlandish comments about his sexuality all the time has never really spoken about his childhood, upbringing and why he choose to live the way he does and if his family members are comfortable with it.

Bobrisky had before now, opened up on his sexuality. The Internet personality who denied several times being gay, admitted that he is in a relationship with an influential male politician. Bobrisky revealed this on his Instagram page while chiding his critics.

‘’All this house boys and girls coming to drop comment on page are you all stupid.

‘’Do you think your hate comments can change me? Why are you trying so hard to get my attention?

Fuck off my page and go and find something meaningful to do with your life. Just this morning I have made up to 750, 000 hustle still continue. You are here wasting your Mb on someone else life style.

‘’If all your insult bothered me I should have stopped posting here.

‘’Yes am gay, I will go to hell fire, thanks. Please what next? I’m tired of the same words, I want to hear something new, cheers!’’

However, Frontline lawyer and Senior Advocate of Nigeria (SAN), Festus Keyamo who reacted to the post said Bobrisky cannot be jailed for publicly admitting he is homosexual, unless caught in the act.

“Except the person says he is gay and refers to a particular gay act that can be verified. For example, if Mr. A comes out on social media to say I am a thief, he cannot be arrested because his declaration that he is a thief cannot be linked to a particular act of stealing.”

“Anybody can come out to say I am a kidnapper but if you do not link that declaration to a particular incident that happened, that person cannot be arrested.”

“So also, if a person comes out to say I am gay and you can’t link it to a particular gay act that actually happened or that he was caught in the act, I think it is wrong for such a person to be arrested.”

“You can only be arrested when you consent to the act that can be verified. He can be arrested for saying that he is gay but it must be linked to a gay act that happened. You cannot be arrested for just saying you are gay,” Keyamo said.