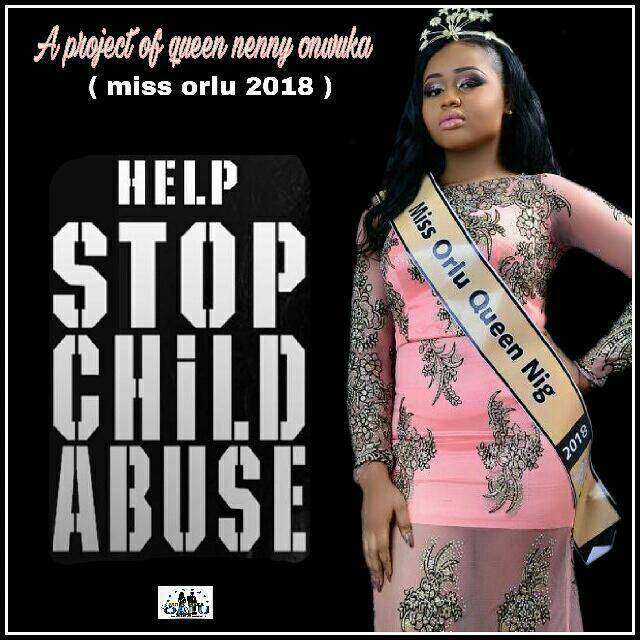 Campaign against Child abuse
As a lady with vision,passion and knows what my people want,as the Miss Orlu Queen Nigeria 2018,I would love to carry out a pet project on child abuse..

it is also any illness,impairment or abnormal condition that affects primarily infants and children. It is a practice where by children are battered, deprived of some basic needs in the home and at school.The saying that the child is the Father of the man recognizes the fact that the quality of today’s child will determine the quality of tomorrow’s man.

In Western Orientation,child abuse extends to various misuses of children, especially with regards to functions relating to certain responsibilities such as “child labour” either in the form of “farm work”, or street hawking which many children in African cultural content embark upon as an acquired work rule in an extended family system.In our country Nigeria,apart from the residential areas,children are seen hawking from dawn till night. Most times some parents abandon their children to the streets and this children are seen begging,crying and holding people just for them to have money for food.

These children exposed to the world at their early stage in life are also victims of circumstance because from hawking on the street’s, they can engage in prostitution,armrobbery and also be victims of kidnapping or death.The greatest problem of child abuse is how it leaves its victims afterwards. It’s a cancer that eats deep into their mind till suicidal thoughts start to set in….please let’s stop child abuse…
It needs to stop…
Support queen Steph Nenny Onwuka…in her campaign today