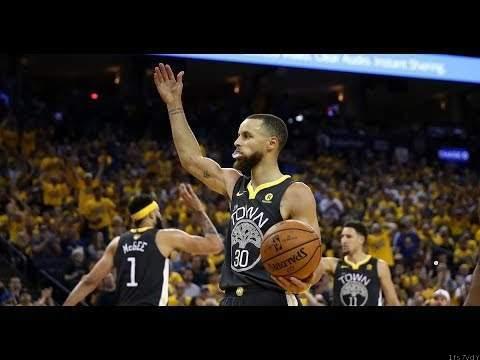 Stephen Curry hit an NBA Finals-record nine 3-pointers and scored 33 points, leading the Golden State Warriors to a 122-103 win over the Cleveland Cavaliers for a 2-0 lead.

Kevin Durant found his steady stroke to score 26 points to go with nine rebounds and seven assists while also handling a load of the defensive assignment against LeBron James. Klay Thompson added 20 points playing on a tender left leg to put the defending champions two victories from a repeat title they have talked about since the season began last fall.

James followed up his 51-point performance in Game 1 with 29 points, 13 assists and nine rebounds in a far tamer finals sequel minus the utter craziness of a drama-packed opener three days prior. Kevin Love had 22 points and 10 boards for the cold-shooting Cavs, who will now try to gain some momentum back home.

JaVale McGee scored 12 points, making all six of his shots in his first career NBA Finals start as Warriors coach Steve Kerr made a lineup switch that proved spot on.

Another key role player, Shaun Livingston, made his five field-goal tries for 10 points to give Golden State a lift in the first half after making all four of his shots.

Warriors lead the NBA Finals 2-0 as the series heads back to Cleveland for Games 3 & 4.

Violette - December 9, 2020 0
Afropop female singer and songwriter Tiwa Savage have been recognized for the great work she put in her hit single, 'Koroba' as it's ranked...

Johnson Olumide - June 9, 2021 0
Nigerian music star, Tems has opened about her performance on the Wiskid's Essence song. According to her, she feels like she didn't do enough on...