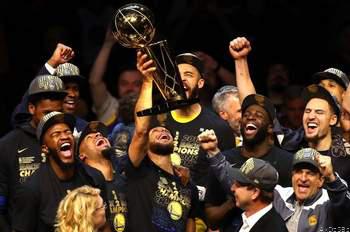 Curry led from the front with 37 points in Game 4 as the Warriors retain their NBA title with a 4-0 whitewash of the Cleveland Cavaliers.

After building a nine-point lead by half-time, the Warriors put the game out of Cleveland’s grasp with a third-quarter rally in which they outscored their opposition 25-13. LeBron James left the court with 4:03 left on the clock and the Cavs down 102-77, having just turned over the ball to Durant while the game slipped out of their reach.

James had 23 points on the night, with his Cleveland side looking to do the improbable and overturn a 3-0 deficit for the first time in NBA Finals history.

Apparently, The Game 1 heartbreak proved to be too lethal for the Cavaliers’ Championship run in the Finals series with the mighty Golden State, as Cavs lost 108-85 in Game 4.

Steph Curry had 37 points in the fourth game in Cleveland, while Durant notched up his first career NBA Finals triple-double with 20 points, 12 rebounds and 10 assists. KD was awarded the NBA Finals MVP, making him one of the six players in the history of the NBA, to be crowned NBA Finals MVP two years in a row.

Golden State won their third trophy in four years – all three against Cleveland – and recorded the first series sweep in more than a decade.

Speaking after the game, James said he had played the previous three with a hand injury. Wearing a cast at a press conference, he said: “What happened? Self-inflicted post-game after Game 1, I was very emotional for a lot of different reasons.”