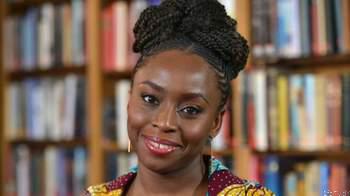 Named in memory of playwright Harold Pinter, the prize celebrates his respect for British and Commonwealth writers who take an “unflinching, unswerving” look at the world. The judges praised Adichie’s “sophisticated” approach to “gender, race and global inequality”. The Half of a Yellow Sun author described the award as an “honour”.

“I admired Harold Pinter’s talent, his courage, his lucid dedication to telling his truth,” she said. Adichie will receive the award – established by literary charity English PEN – at a ceremony at the British Library in October, where she will deliver an address. This will include announcing the writer named this year’s International Writer of Courage, reflecting English PEN’s support for freedom of expression in the face of danger.

A limited edition anthology of 10 Pinter Prize lectures will be printed to celebrate the prize’s 10th anniversary. Adichie’s debut novel, Purple Hibiscus, won the Commonwealth Writers’ Prize in 2003. It was followed three years later by Orange Prize winner Half of a Yellow Sun.