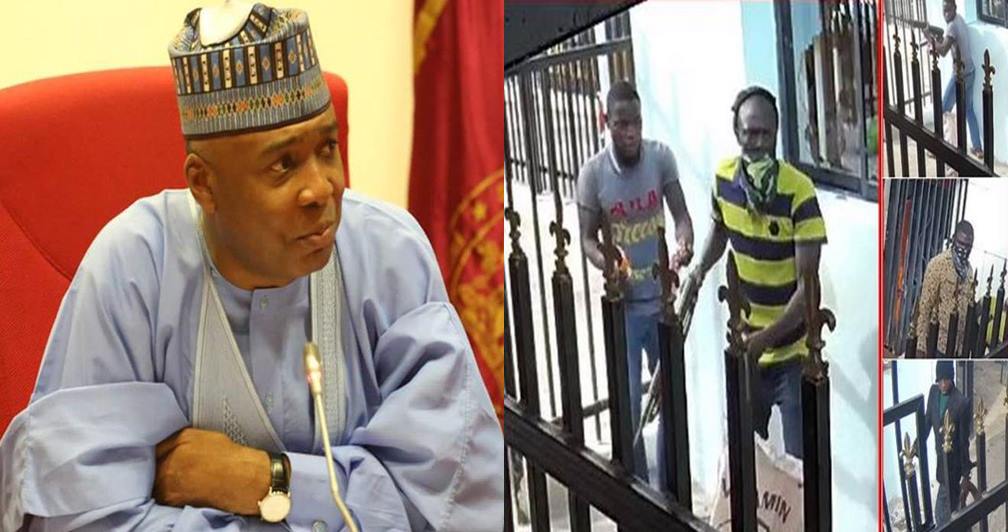 The police said today they have invited Senate President, Bukola Saraki over 5 April multiple bank robbery in Offa Kwara state, during which 33 persons, including nine policemen, were killed.

The police claimed five of the bandits arrested and who have made confessions during interrogations indicted the senate president.

The police therefore wanted to interrogate the senator, who is Number 3 person, in the order of protocol in the country. The police did not give a specific time they wanted Saraki to report.

“The Senate President, Sen. Bukola Saraki is being invited by the Nigeria Police Force to report to the Force Intelligence Response Team office at Guzape, Abuja to answer to the allegations levelled against him from the confessions of the Five (5) Gang Leaders, namely; Ayoade Akinnibosun, Ibukunle Ogunleye, Adeola Abraham, Salawudeen Azeez, Niyi Ogundiran and some of the other Seventeen (17) suspects arrested for direct involvement and active participation in the Offa Bank Robbery and the gruesome killing of 33 innocent persons which include some pregnant women and nine Police personnel”, Moshood said.

The police in the statement appeared to have dropped hints on what they wanted to ask Saraki about, as they claimed that the five men, who were the leaders of the bandits `’admitted, confessed and volunteered statements that they were political thugs of the Senate President, Federal Republic of Nigeria, Sen. Bukola Saraki and the Executive Governor of Kwara State, Alh. Abdulfatah Ahmed”.

The other hints dropped were the recovery of one Toyota Prado Jeep with Reg. No. 19KWGH belonging to the Personal Assistant, Political to the Governor of Kwara State and a Sticker plate number with inscription “SARAKI” “Kwara, State of Harmony”.

According to the police, “the Five gang leaders further confessed during investigation that they are political thugs under the name Youth Liberation Movement a.k.a “Good Boys” admitted and confessed to have been sponsored with firearms, money and operational vehicles by the Senate President, Sen. Bukola Saraki and the Governor of Kwara State, Alh. Abdulfatah Ahmed.”

Police explained why the Chief of Staff and the Personal Assistant to Governor Abdulfatah Ahmed were also arrested:

“The exhibit vehicle was subsequently recovered from the premises of the Min. of Environmental and Forestry in Ilorin, Kwara State. While the sticker plate number with inscription “SARAKI” “Kwara, State of Harmony” removed from the vehicle was recovered from one Adeola Omiyale who drove the said Lexus Jeep to Government House, Ilorin immediately after the Bank Robbery.

“The Personal Assistant (Political) to the Executive Governor of Kwara State, Mr. Alabi Olalekan, who is privy to information that the Police is looking for the Lexus Jeep as an exhibit used in the Offa Bank Robbery… directed one Adeola Omiyale to relocate the Lexus Jeep to Government House, Ilorin. The PA (Political) is currently in Police custody and has made useful statement assisting the Police in further investigation into the case.

“A revolver pistol and pump action gun were recovered by the Police Investigation Team from the Personal Assistant (Political) to the Executive Governor of Kwara State, Mr. Alabi Olalekan’s Farm where he directed his brother to hide them after his arrest by the Police.

“In order to conceal evidence, the Chief of Staff to the Executive Governor of Kwara State, Mr. Yusuf Abdulwahab who has been arrested and taken into Police custody, arranged the removal of the sticker plate number with inscription “SARAKI” “Kwara, State of Harmony” from the exhibit vehicle.

The police gave an assurance that they will continue to ensure that the rule of law prevails in every case under investigation and every offender is brought to justice.

All the suspects now in police net:

All the exhibits recovered

iv. One (1) Revolver Pistol – In Police Custody in Ilorin

vii. One (1) Toyota Prado Jeep with Reg. No. 19KWGH belonging to the PA Political to the Executive Governor, Kwara State – In Police Custody in Ilorin

The Banks and Police station robbed: