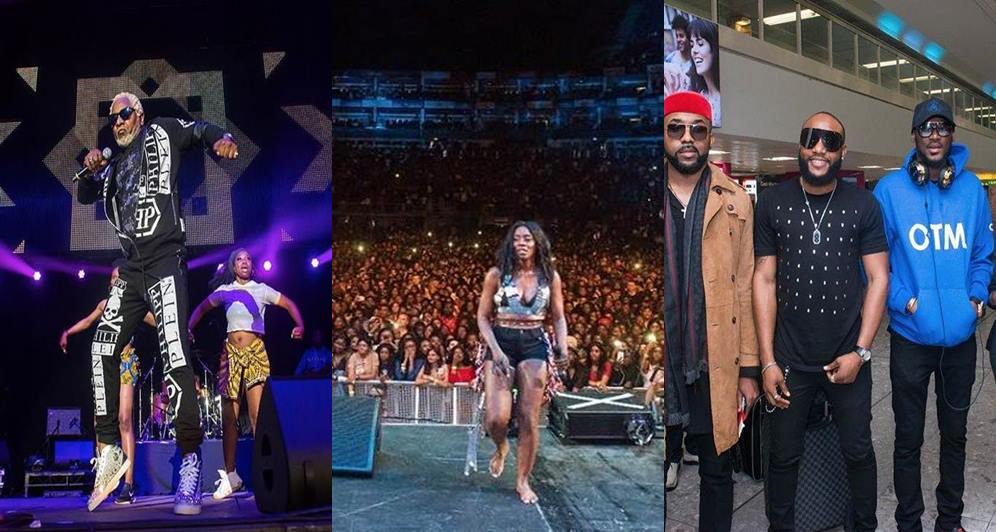 The 2018 edition of the One Africa Music Festival held on Saturday, June 2 and it was an improvement on the previous edition as the organisers seem to have learnt their lessons and were able to avoid the unnecessary hitches that characterized the 2017 edition of the festival.

On a night and venue where the Nigerian Super Eagles had earlier in the day taken on their English counterpart, the Three Lions in an international friendly building up to the World Cup at the Wembley stadium, Nigerians who attended the game largely stayed back to partake in the One Africa Music Festival which held at The SSE Arena, Wembley.

Amongst those who were present at the One Africa Music Festival 2018 were superstars Wizkid alongside Tiwa Savage intensifying their romantic links despite not billed to perform on the night, as they were captured together amidst the crowd enjoying the concert.

Wizkid however stole the headlines when he later joined Wande Coal on stage during the latter’s performance as they both performed Soco and also celebrated his former label boss, Banky W.

Violette - November 14, 2020 0
Award-winning singer, David Adeleke, better known as Davido, has revealed that the parents of his fiancée, Chioma Rowland, were victims of cyber bullying when...

‘Movie Producers Can No Longer Afford Me’ – Jim Iyke

Johnson Olumide - July 6, 2018 0
Nollywood actor, Jim Iyke, has stated that movie producers can no longer afford his fees and that is why he is no longer seen...

Johnson Olumide - September 20, 2021 0
Jaypaul is one of the lucky new housemates who made it to the BBNaija House last night as it premiered on air. According to the...

Johnson Olumide - April 25, 2018 0
While some celebrities are there to serve as role models, others are just working tirelessly for your downfall  Few hours after the announcement of Nina’s...