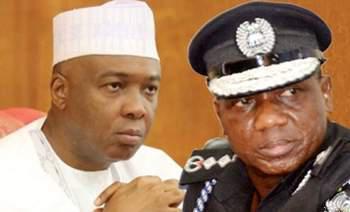 Senate President, Bukola Saraki, has once again been indicted by some arrested suspects of Offa bank robbery. The Nigeria Police Force said the Senate President is still under investigation after the suspects further indicted him.

Force Public Relations Officer, Jimoh Moshood, addressing journalists, in Abuja, on Wednesday, said the two suspects confessed to being political thugs for the Senate President and that they accompanied Senator Saraki to the palace of the traditional ruler of Offa, Olofa of Offa on a condolence visit after the robbery. This comes after Saraki was earlier indicted by five of the Offa bank robbery suspects who confessed to the crime on Sunday.

The five gang leaders claimed that they were political thugs of the Senate President and the Governor of Kwara State, Abdulfatah Ahmed.