Home News World Cup 2018: No Chicken in the stadium from the Nigerian Fans,... 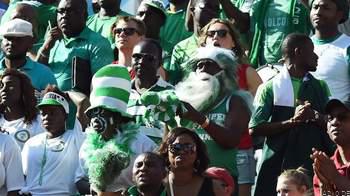 Russia has denied Nigeria’s football fans the opportunity to bring live chickens into the stadium when the Super Eagles are playing. As reported by Russia’s Interfax.ru, Minister of Culture and Tourism of the Kaliningrad region, Andrei Ermak told reporters.

“Our information center MCH-2018 receives a lot of various questions: fans from Nigeria asked if it’s possible to go to the stadium with a chicken, it’s their symbol, the citizens are sick with them at all matches, we told them that to pass a live chicken, in any case, it is impossible “, – said Ermak. At the same time, he noted that if the Nigerians are rooting for their team in other places, “we will, of course, advise them where the chicken can be bought.”

We are ready to satisfy the most eccentric inquiries,” the regional minister added. The supporters club of the Super Eagles have been known to go into stadiums with a live chicken, which is one of the ways they cheer on the team to victory. Nigeria fans were turned away from Ellis Park in Johannesburg, South Africa in 2010 after their demand to take chickens, painted in the nation’s colours into the stadium was refused.

Alex reveals why Tobi unfollowed her on Instagram,revealed they had an argument

Johnson Olumide - December 20, 2019 0
Two day ago news spread that Former BBNaija Duo of Tobi and Alex both unfollowed each other due to unknown number of reason. which...

Johnson Olumide - June 29, 2019 0
RIRI bad girl cooled off a lil over the weekend by wearing a pyjamas to the studio.  she was seen walking across the street and chilling with...

Violette - July 28, 2019 0
Men who take part in oral sex have been depicted as "absurd, debased, irregular and foolish" people who must have no spot in the...

Eddie Andy - March 8, 2018 0
Researchers say they have discovered a HIV antibody that can suppress the virus for nearly six months without additional treatment. The new study involved about...