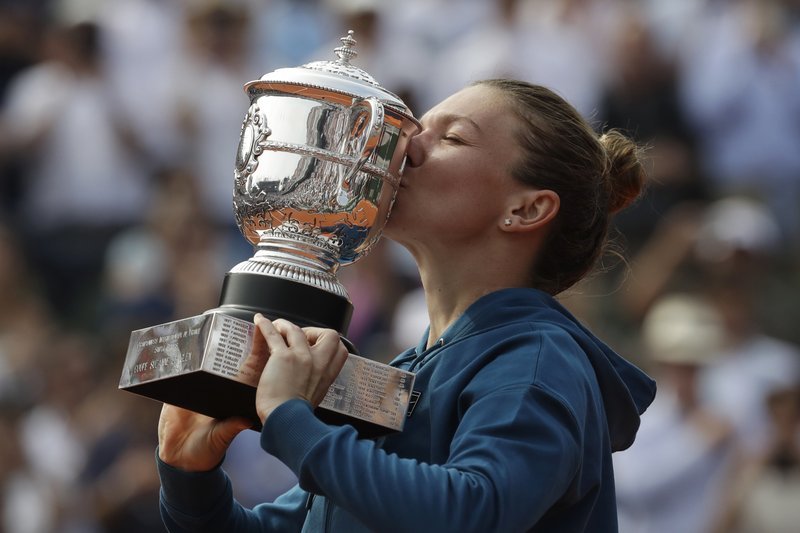 PARIS (AP) — Simona Halep kept telling everybody who would listen: She was a different player. She was stronger mentally. She wanted so much to finally win a Grand Slam title and was sure that, one day, she would.

After three losses in major finals, maybe Halep was trying to convince herself as much as anyone else she actually could do it. Either way, she was right.

Halep added Grand Slam trophy No. 1 to her No. 1 ranking, coming back from a set and a break down to beat Sloane Stephens 3-6, 6-4, 6-1 Saturday and win the French Open championship in a match made up of lengthy points and key momentum swings.

“When I was down a break in the second set,” Halep told the crowd afterward, “I thought, ‘Everything is gone. I’m going to start to relax and enjoy the match.’”

The 26-year-old Halep began the muggy afternoon having been to this stage before but never able to display her best. She lost in two previous appearances in a final at Roland Garros, against Maria Sharapova in 2014 and Jelena Ostapenko in 2017. Halep then fell to 0-3 with a trophy on the line at the Australian Open in January, beaten by Caroline Wozniacki.

“I just tried not to repeat the same as last year,” Halep said. “I did everything I could.”

And when Saturday’s fourth chance arrived, Halep began slowly, unable to solve Stephens, the 10th-seeded American who won her first Grand Slam title at last year’s U.S. Open. Both women are adept at defense, figuring out ways — via speed, strength, skill and instinct — to get nearly every ball back over the net. They’re also both able to switch to offense in a snap.

Those traits lent themselves to engaging exchanges of 10 strokes, 20 strokes or more, sometimes interrupted by spectators who would gasp or begin to clap, thinking that a point was over when it still was not. The players were not trading looping shots, mind you, meant merely to keep the ball between the lines. For the most part, they were violent smacks at the ball, delivered with the intention of ending a point. It often seemed effortless for Stephens, who broke for a 3-1 edge when Halep put a forehand in the net.

When Halep ended a 14-stroke point by pushing a backhand wide, Stephens owned the first set. She wheeled toward her box, which included U.S. national soccer team player Jozy Altidore, and shook a fist. Not much after that, Stephens broke to begin the second set, then held for a 2-0 lead. It appeared she was on her way.

And then, suddenly, everything changed. Stephens started missing. A double-fault here. A forehand into the net there. A backhand wide. Another long. Halep took 15 of 18 points and four games in a row. The player who was up a set and 3-0 in the second in last year’s final at the clay-court Grand Slam tournament was now the one able to dismiss a deficit.

While Stephens temporarily halted her slide, getting to 4-all, Halep used two consecutive powerful forehand winners to hold in the next game. She broke to grab the second set when Stephens sailed a backhand wide, all part of a seven-game run that made it 5-0 in third.

“Not the trophy I wanted,” Stephens said, looking at her runner-up plate, “but it’s still beautiful.”

Halep became the first woman from Romania to claim a Grand Slam title since her current manager, Virginia Ruzici, won the French Open 40 years ago.

Boisterous fans pushed Halep throughout, chanting “See-moe-nah! See-moe-nah!” throughout. When she first walked out on Court Philippe Chatrier. During the coin toss. During the warmup period. And, especially, as Halep collected game after game down the stretch.

When the match ended, Halep dropped her racket at the baseline and covered her face with her hands. Soon enough, she was climbing up into the stands to share a big hug with her coach, Darren Cahill.

He had threatened to stop working with her, saying that Halep’s negative body language and attitude were standing in her way.

Perhaps he was correct. This much is certain: Simona Halep is a Grand Slam champion, now and forever.

Johnson Olumide - April 1, 2021 0
Borussia Dortmund hottest Striker, Erling Haaland has been in the news for the past year, since bursting onto the scene of football via scoring...

Johnson Olumide - November 23, 2018 0
BBN’s Princess Onyejekwe has just said that being real does not take one anywhere. The reality star was questioned by a friend why she no...

SPORTS:Juventus Medical Report States that Christiano Ronaldo has Physical Traits of a 20 Year...

Eddie Andy - July 26, 2018 0
Cristiano Ronaldo is no doubt one of the most hardworking footballers in the world who makes sure his body is in good condition. Following his £100million switch...