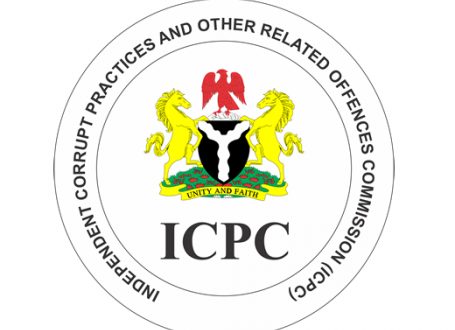 Kelekumor, who was sentenced by Justice BrikiOkolosi, without an option of fine, was accused by theIndependent Corrupt Practices and Other Related Offences Commission (ICPC) of violating Section 19 of the Corrupt Practices and Other Related Offences Act, 2000, by using his position to confer unfair advantage upon his relation. The offence is also punishable under the same section.

The Commission, in a one-count charge, said that the convict gave employment to his daughter, who was then a Senior Secondary Two (SS2) student, into the local government service, knowing fully well that she was at the same time a full-time student.

Miss Tom was employed as a Messenger on Salary Grade Level 02 by her father, in July 2003, while she was still a student of Tamigbe Grammar School, Toru-Tamigbe, Burutu Local Government Area, Delta State.

A part of the charge sheet read: “Abayomi Tom Kelekumor, while being a public officer to wit: Education Secretary in Bomadi Local Government Council of Delta State in the month of July, 2003 or thereabout did confer unfair advantage upon his daughter, Miss Tom Preye when he employed her as a Messenger on Grade Level 02 while she was still a student of Tamigbe Grammar School, Toru-Tamigbe, Burutu Local Government Area of Delta State.”

The judge ruled that the convict will serve his terms without any option of fine in accordance with the act.