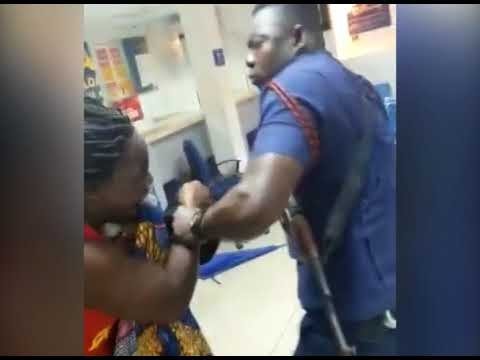 A Ghanaian police officer has caused an outrage online after he was filmed brutally assaulting a nursing mother at the Midlands Savings and Loans Company in Ghana.

In the viral video which surfaced online today, the armed police officer is seen launching an attack by hitting the woman multiple times with an umbrella, while she was holding her baby.

At some point, when some bystanders tried to rescue the baby from the mother, the officer repeatedly slapped and punched the helpless woman until she fell to the ground.

The disturbing video ended with the brutal officer dragging the woman out of the company.

It’s unclear what sparked the confrontation, but a lot of celebrities have condemned the attack, and are calling on the authorities to penalize the officer.

According to Myjoyonline, the officer identified as Frederick Amanor Skalla has been arrested and is currently at the Police Headquarters awaiting possible prosecution for indecent assault.

Watch the disturbing video below

Rob Kardashian looking all Muscled up as he shares another slimmed down photo of...

Johnson Olumide - February 17, 2020 0
If you all remember vividly, Rob Kardashian become over weight sometimes last year and was axed from the family reality show, Keep Up with...

Why I accepted My first movie role – Singer Waje Reveals

Johnson Olumide - March 21, 2020 0
Nigerian singer, Aituaje Iruobe, popularly known as Waje, has explained why she accepted her first movie role. The singer debuted as an actor in ‘Tunnel’,...

Johnson Olumide - March 21, 2020 0
Mr Eazi and Temi Otedola have been together for a while and have continued to show to whoever cares that their love will keep waxing strong...

Davido Release Emotional Speech About His Past As He’s Set to Drop His Album...

Adedokun Moses - November 20, 2019 0
Davido has is no doubt one of the most celebrated artiste Nigeria has ever produced as he has been doing wonders in his illustrious...