A social media troll got more than she bargained for after she said
Khloe kardashian’s daughter isn’t ‘cute’.
The lady on twitter, tried to make a joke out of a sensitive situation
when she tweeted; Is it just me or is @khloekardashian baby, true, not
cute at all?

Khloe, who has 26.5 Million followers on twitter then replied her
saying;

“What self-respecting adult would even comment on a child’s
appearance? What type of disgusting human being are you? It’s
pathetic that you are this miserable in your life”
Khloe’s reply had a ripple effect as her fans trooped to blast the troll.
However, the troll felt remorseful, then she deleted her initial tweet
and tendered an apology;
“Honestly didn’t mean for my tweet to get as many replies and whatnot
to it. I apologize for for my actions and I shouldn’t have said what I
said. I wasn’t thinking at all”. 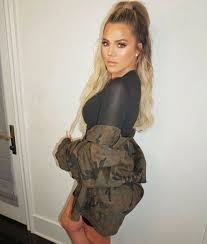