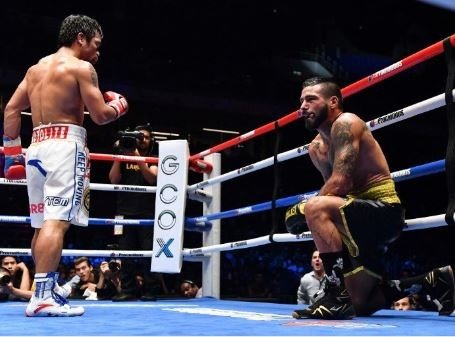 It was a dominant, devastating display as “smoking hot” Pacquiao registered the 60th win of his 23-year career knocking down the big-puncher from Argentina as early as the third round with a stunning left uppercut that thudded around the Axiata Arena in Kuala Lumpur.

The 35-year-old Argentine, who came in with a reputation as a big puncher, had no answer to Pacquiao’s blistering speed and he dropped again in the fifth. When a right-left combination thudded home to send Matthysse crashing down for a third time in the seventh round referee Kenny Bayless stepped in to save him from further punishment.

READ ALSO
Revealed:- Anthony Joshua Is Worth Millions Of Pounds But His Close Family Live In Poverty (See Details)

“It was a long time ago since I’ve done that. I came out smoking hot. I’m surprised I knocked him down so early in the third, fifth and seventh. We did a good job in training. We were not pushing hard we controlled our pace and ourselves. I’m no longer young, so thanks to my trainer and all my team members” said Pacquiao.

A shell-shocked Matthysse, who had come in with a record of 36 knockouts in 39 wins with just four defeats, conceded he had no answer to Pacquiao’s speed, movement and power as the “old Manny” returned with a vengeance. “It’s most difficult to be fighting Manny Pacquiao. He’s a great fighter. I lost to a great legend” he said.

#BBNAIJA: There Should Be a “World Jaruma Day” – Ella Declares (Photo)

Violette - December 4, 2019 0
Big Brother Naija Reality star, Ella has stated that there should be a day when Entrepreneur and Philanthropist, Jaruma should be celebrated. Recall that Ella...

Violette - March 31, 2020 0
Music producer, Master Kraft and Pheelz are set to battle it out in an epic producer battle. The Social media world is about to be...