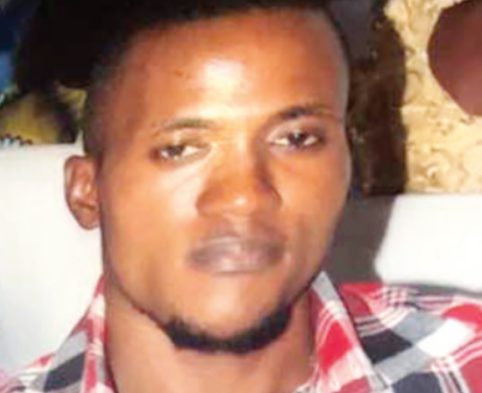 The police in Lagos state is on the trail of 27-year-old man, Emmanuel Eghaghe, for beating his mother to death because she allegedly refused to give him a sum of N20,000.

Acciording to reports, Emmanuel had visisted his 61-year-old mother, Helen, at her shop on Jinadu Street, Ajangbadi, Lagos State, on July 6, 2018 and asked her to give him pocket money which she refused to.

He got angry and went violent on her. He started to harrass her and whilst he was struggling with her purse, slammed her head on the wall in the shop. She had a deep cut on her head and her mouth was gushing out blood. Seeing how badly injured his mother was, Emmanuel immediately fled the scene.

Narrating how the incident happened, a resident in the area who spoke with Punch, said

“The sister of the suspect has a hotel in the community. He gave their mother a room in the hotel. She also opened a shop for the woman in front of the hotel. On that day, the suspect approached his mother and asked her to give him N20,000 pocket money. The woman said she did not have that kind of money. He pushed her to the wall and broke her head in the process. There were bloodstains everywhere and the woman eventually died in a hospital. He ran away immediately and has yet to be found. His sister was abroad and she was planning to relocate him there. A resident informed the woman’s brother and he travelled to Lagos from Benin. I was surprised why a child would do such a cruel thing to his mother”’.

Also speaking, the brother of the deceased, Friday, called him to inform him of thr gruesome murder

“Around 11am that day, somebody called me with my mum’s (Helen’s) phone number and said somebody wanted to kill her. When I asked the person what the problem was, she cut the call. I called back, but she did not pick her calls. It was a little girl that was staying with her who later picked the call and told me that my mum had been killed. I left Benin immediately for Lagos. It was the woman who brought me up. Emmanuel was the fifth and the last child of the family. One of them lives in Benin here while others live abroad. I didn’t know why he killed her.”

Confirming the incident, the Lagos state police command’s spokesperson, Chike Oti, said the command is now on the trail of the suspect

“The police got a report that the suspect hit his mother’s head against the wall in an attempt to get money from her forcefully. As a result, she became unconscious and was rushed to the hospital for treatment. She gave up the ghost at the hospital. The suspect is now at large. Detectives visited the scene and deposited the corpse at the Isolo General Hospital mortuary for autopsy. A manhunt for the suspect is being intensified.”