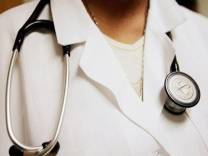 Staff of the Kogi State Specialist Hospital in Lokoja, were thrown into mourning on Monday as the Head of Department of Internal Medicine, Dr. Chukwudibe Rosemary, suddenly died while another Dr. Idris Nuhu and three nurses slumped due to alleged exhaustion and over work.

According to a report by THISDAY, a ward attendant equally slumped and is currently on admission with the three nurses.

It was gathered that they have not been paid since February this year by Kogi State Government following traffic payment adopted by the government.

The deceased female doctor, who was admitted last Sunday evening for heart related issues, suddenly developed complications around 2 a.m. yesterday as her colleagues battled her for over five hours but lost her in the early hours of monday.

On hearing the news of the passing of Rosemary, another, Dr. Idris Nuhu and three nurses also slumped simultaneously and currently on admission at the Maternity ward of the hospital.

According one of the staff of the hospital, her death was not unconnected to financial problem as the deceased was heard lamenting that her name has been omitted in the March salaries payment schedule as she languish in penury for her drugs which are difficult to purchase due to nonpayment of salaries

When a correspondent visited the hospital on Monday, it could not ascertain the names of the nurses as they have been heavily sedated and under close watch of team of medical doctors.

Meanwhile, the Secretary, Association of Residence Doctors, Kogi State Specialist Hospital, Dr. Moses Adaudi, who confirmed the incident, said the death of the doctor was as a result of lack of Intensive Care Unit at the hospital where she could have been treated when she developed complications.

“There was no (oxygen) spanner to place her on oxygen even when she was to undergo some tests…there was money to carry out the test,” he alleged.

He called on the state government to make the welfare of civil servants a top priority.

Nurses, who spoke on condition of anonymity, said Dr. Rosemary was a well-loved, thorough bred professional whose death had created a very big vacuum difficult to be filled.

It was learnt that all the three nurses have been on duty since last Saturday morning and have been exhausted due to workloads which had increased in the last two months as a result of the strike of Joint Health Sector Union (JOHESU).

PHOTOS: Another liquor %ngle in Kogi has been rocked by an explosion.