A Bowen University student identified as Tolu Mafo, has reportedly tried to take her own life by drinking a fabric bleaching product she was under pressure to pay a debt she owed.

According to multiple online reports, the female student had drank Hypo bleach in a suicide attempt after allegedly spent her school fees and two of her friends’ school fees at a party held in Lagos state.

The 300 level mass communication student had reportedly spent part of the money in trade fare too, and was reportedly given a deadline to pay back the school fees by her friends after they discovered what she had done.

The slay queen who was under pressure to pay back all the money, decided to end it all gulping the liquid poisonous content.

Below are screenshots of a chat between students of the school who are narrating the incident: 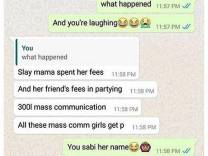