Home Relationship & Dating Wedding Goes Awry As Groom Gets Bitten By Guest Who Accused Him... 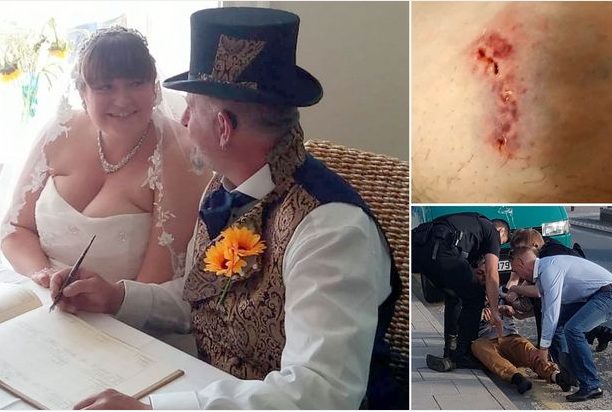 A wedding was ruined when a man staying at the same hotel accused guests of having sex with his girlfriend – and then bit the groom. Damian Paine, 43, and wife Louise, 34, missed the first dance and were unable to cut their wedding cake after their big day was disrupted.

The wedding, held in a hotel, took a turn for the worse when Neil Jones, 35, who was also staying there, confronted a guest who he thought was sleeping with his partner.

Jones banged on the door to the guest’s room and Damian, who had just finished the wedding dinner, was forced to intervene.

He then bit Damian before headbutting the hotel’s main entrance door as dozens of guests watched in horror.

Jones was found guilty of assault by making threats, causing criminal damage to a door and assaulting the groom at the Gwesty’r Marine Hotel in Aberystwyth.

After police arrested Jones, four officers stayed at the wedding for the rest of the evening while Damian was taken to hospital for blood tests.

Jones was given an 18-month community order when he appeared at Aberystwyth Magistrates Court for a two-day trial. He pleaded guilty to assault by making threats and causing criminal damage to a door. He denied assault by biting during the incident on May 18, claiming he acted in self-defence, but was also found guilty.

Alan Lewis, defending, said Jones had been using drugs and was “deeply sorry” for disrupting the wedding.