This was made known in a series of tweets by Osinbajo’s Senior Special Assistant (Media and Publicity) Laolu Akande.

AgP Yemi Osinbajo has directed the termination of the appointment of the DG of the DSS, Mr. Lawal Musa Daura.

Mr. Daura has been directed to hand over to the most senior officer of the State Security Service until further notice. 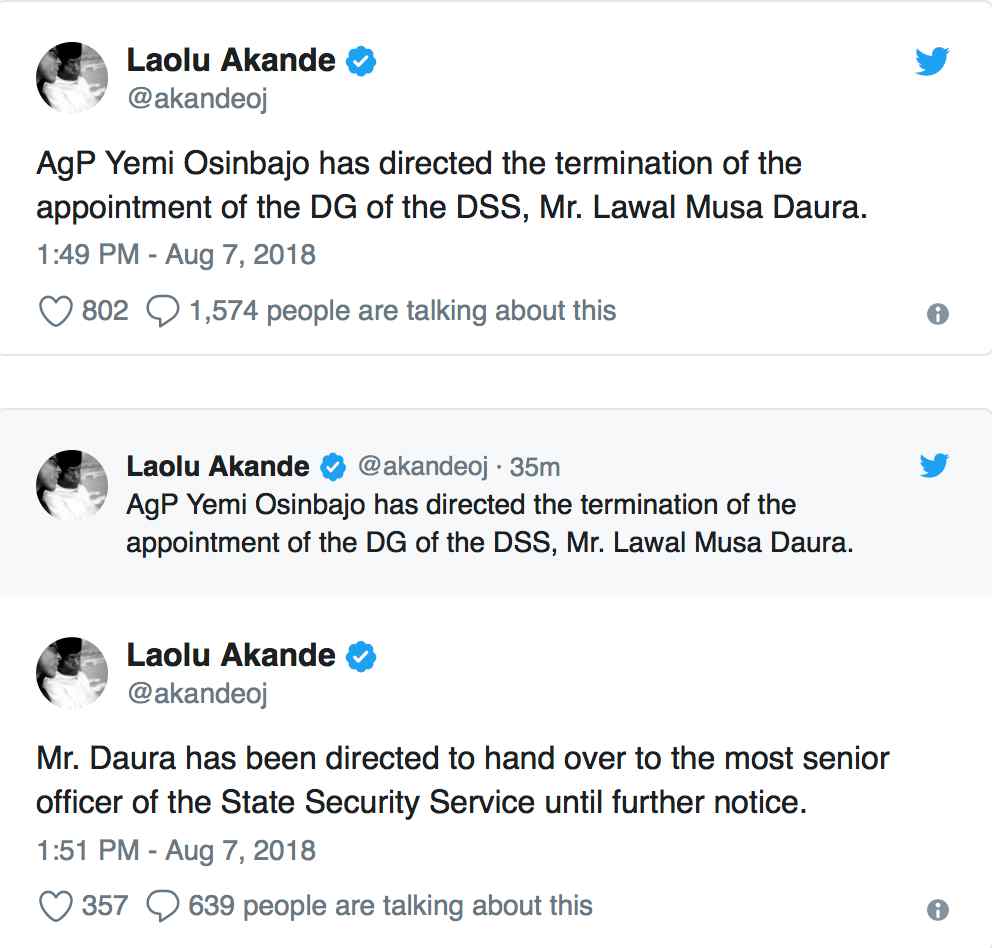 Masked operatives of the DSS had blocked the entrance to the National Assembly on Tuesday in what is being reported as an alleged attempt to get pro-Buhari supporters to impeach the Senate President Bukola Saraki.

The officers later granted the lawmakers entry into their offices.

Following the sack of the Director General of the Department of the State Security (DSS), the Office of the Ag. President has released a statement on the reasons behind the action.

The Press statement is as follows:

Acting President Yemi Osinbajo, SAN, has described the unauthorized takeover of the National Assembly complex earlier today as a gross violation of constitutional order, rule of law and all acceptable notions of law and order.

According to him, the unlawful act which was done without the knowledge of the Presidency is condemnable and completely unacceptable.

By this statement, Professor Osinbajo is consequently assuring Nigerians that all persons within the law enforcement apparatus who participated in this travesty will be identified and subjected to appropriate disciplinary action.

Laolu Akande
Senior Special Assistant to the President on Media and Publicity,
Office of the Acting President,
7th August, 2018

Violette - July 1, 2020 0
The London football club, Arsenal FC who is popularly called the gunners Have the habit of always looking games and matches every now and then. And...

Johnson Olumide - February 17, 2020 0
Nigeria's Legendary Actress, Kate Henshaw has been under socil media war for a few days now, just after a fan called her ugly, the...

Johnson Olumide - May 12, 2020 0
US Rapper, Nicki Minaj has sparked pregnancy speculations following a video she released on her Instagram page. Her fans are already sending her congratulatory messages...

Kylie Jenner’s Car is Bae to Her

Johnson Olumide - February 17, 2020 0
The just turned 18-years-old Teenager and the last born of the Kardashian/Jenner Family posted this pictures on her Instagram and captioned it : kyliejenner? alone time w bae Kylie has been...

Johnson Olumide - February 17, 2020 0
The 34-year-old and 21 time grand slam winner shared this photos on her Instagram page yesterday. she captioned it serenawilliamsBehind the scenes of one of my Berle bra shoots. @berleiusa (adsbygoogle = window.adsbygoogle || ).push({});