Borno State Governor, Kashim Shettima, has given a cash prize of
N5million to Israel Galadima for scoring the highest mark in the 2018
United Tertiary Matriculation Examination (UTME).

Israel, an indigene of Biu Local Government Area in the southern part
of Borno State, had a total mark of 364 in the just concluded
examination, and also had nine distinctions in his O’level West African
Examinations Council.
Shettima had earlier promised Israel full scholarship throughout his
undergraduate study when he hosted him and his family at the
Government House in Maiduguri to celebrate his exploit.
The Governor promised to give him N1million to cover his yearly tuition
and other expenses while in university.
Presenting the cheque on behalf of the Governor, Borno State
Commissioner for Higher Education, Usman Jaha, urged Israel’s family
to ensure the money is used for the right purpose, and he encouraged
them to pay Israel’s tuition fee in advance of five years to avoid any
future rise in fees. 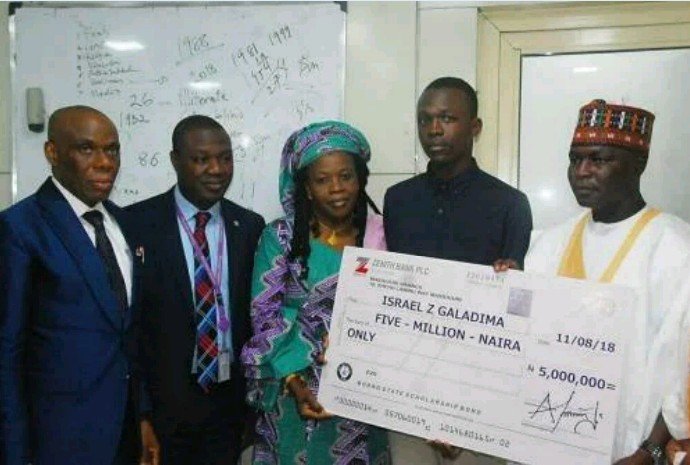 Israel had gained admission into Covenant University in Electronics
Engineering.
Receiving the gift, his family lauded the governor for his kind gesture.
“Governor Kashim Shettima was a University lecturer. He is well-
educated, very sound and visionary,” Jaha said. “He is extremely
passionate about education and those of us from Borno State know
how he is completely changing existing schools, modernizing them and
building many new schools.”
The presentation was done at the office of the Registrar, Covenant
University in Ota, Ogun State.
Also present were representatives of the student’s family, principal of
his secondary school, some officials from the university and Borno’s
liaison office in Lagos.