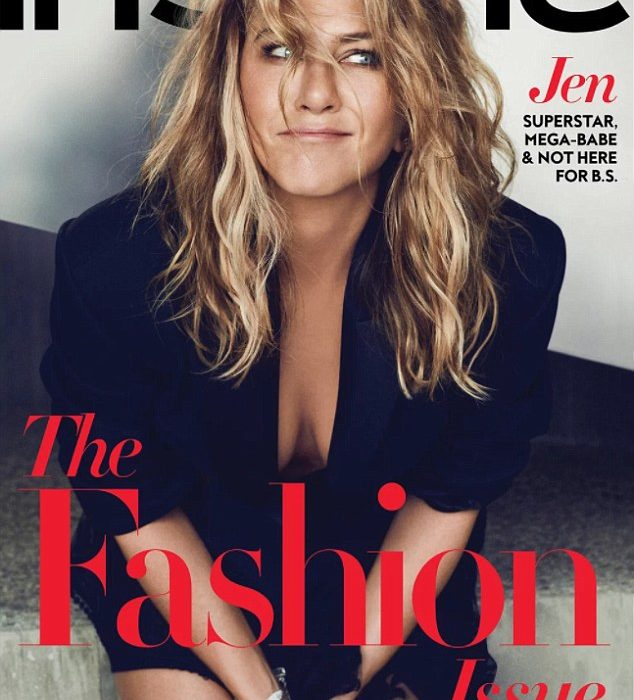 Hollywood actress Jennifer Aniston has just sat down for her most candid interview yet.

The 49-year-old Friends vet, in the September issue of InStyle, revealed she is not heartbroken after her split from Justin Theroux.

On not having kids, she said;

‘It’s pretty crazy. The misconceptions are “Jen can’t keep a man,” and “Jen refuses to have a baby because she’s selfish and committed to her career.” Or that I’m sad and heartbroken. First, with all due respect, I’m not heartbroken,’ said the star.

The Wanderlust actress added: ‘And second, those are reckless assumptions. No one knows what’s going on behind closed doors.’ Here she is referring to starting a family.

‘No one considers how sensitive that might be for my partner and me,’ said the star.

‘They don’t know what I’ve been through medically or emotionally,’ she added, hinting she may have had trouble conceiving.

‘There is a pressure on women to be mothers, and if they are not, then they’re deemed damaged goods. Maybe my purpose on this planet isn’t to procreate. Maybe I have other things I’m supposed to do?’

On sexism, the actress said

‘I’ve definitely had my fair share of sexism in the media,’ Aniston said.

See how DBanj’s son drowned in a pool while he was in USA and how a fan warned him about the pool few weeks ago.

‘Women are picked apart and pitted against one another based on looks and clothing and superficial stuff.

‘When a couple breaks up in Hollywood, it’s the woman who is scorned. The woman is left sad and alone. She’s the failure. F that. When was the last time you read about a divorced, childless man referred to as a spinster?’

On harassment in the workplace, Aniston revealed, ‘I’ve definitely had some sloppy moves made on me by other actors, and I handled it by walking away.

Liberian women fight on social media over flashing of boobs

‘I’ve never had anyone in a position of power make me feel uncomfortable and leverage that over me.’

And the siren said women have been worse to her.

‘In my personal experience I’ve been treated worse verbally and energetically by some women in this industry.’

Aniston did not name names.