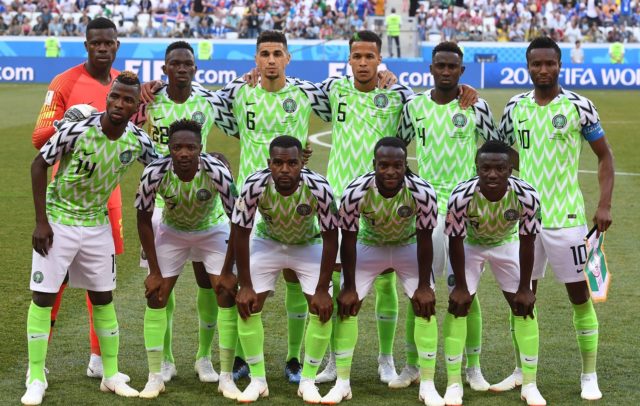 Nigeria has slipped down one spot in the latest FIFA rankings from number forty-eight to forty-nine after failing to qualify for the second stage of the World Cup in Russia.

2018 FIFA World Cup winners, France climbed to the top of the FIFA/Coca-Cola World Ranking in the first edition of the global rankings since they emerged world champions.

France who went up six places are followed by in third place winner at the World Belgium, Brazil is seated third, while World Cup finalist Croatia climb 16 places to fourth, Uruguay, England, Portugal complete top seven in the global rankings.

Germany dropped 14 places to 15th, Argentina now seats 11th, after slipping down 6 places, Chile is 12th, while Poland drops to 18th. All due to disappointing World Cup campaigns.

Tunisia is world’s number 24, and Africa’s No.1. They are followed by Senegal, Congo Dr, Ghana, Morocco, Cameroon and Nigeria in seventh place.

Egypt had a worse fall. Mohamed Salah’s Egypt dropped from 45th to 65th.

The Pharaohs failed to win a game in the World Cup, falling 3-1 to Saudi Arabia in the last match.

The new ranking formula, which was approved by the FIFA Council in June after a lengthy period will be adding and subtracting points won or lost for a game from the previous point totals rather than averaging game points over a given time period as in the previous version of the rankings.

The changes mean that inactive teams now preserve their point totals, with no devaluation of older games. Points are dropped, however, from losing or drawing against weaker opposition, with the only exception to this rule applicable to matches in knockout rounds of major competitions such as the FIFA World Cup