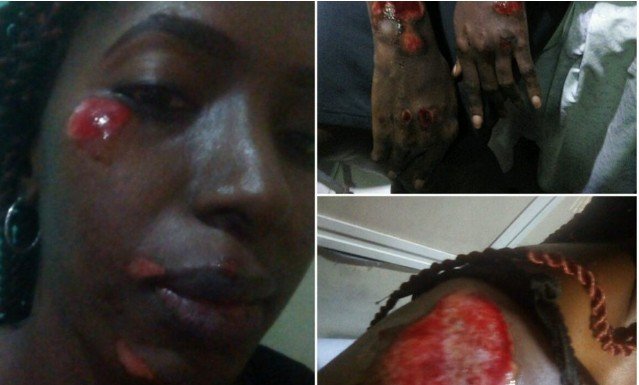 A Twitter user is thankful to God who spared her life after she jumped out of a One Chance vehicle in Rivers State. Though she sustained serious injuries from the fall, she however said it is preferable to dying at the hands of the criminals masquerading as commercial motorists.

One Chance vehicles are vehicles which robbers and ritualists often use for their dastardly acts.

Read her story below.

This morning I went deliver some documents to one of our client companies in onne Rivers State Every thing went successfully. I even went to the bank to lay some complaints. On my way back to the office, I entered this taxi.

First of all they charged cheaper than other taxis but I felt it was cos he was looking for passengers so I entered. Immediately I entered I just felt something was wrong but I couldn’t pin it. It was just the driver and another guy in front. They drove off immediately I entered.

Then I looked round, everything looked in the car.the seat was dirty, The car was too rough for a normal taxi. Immediately I knew I had been trapped. I placed my hand on the door.

Then the driver asked me where I was going again I told him but he kept saying different things maybe to confuse me. I kept telling him even the other guy in front was helping me to give him d direction. That was when I noticed they were giving themselves signals.

My hand was still on the door knob When we got the flyover at at mile one, they diverted and climbed mile one bridge leading to ikwerre road Instead of going straight to ABA road. And immediately they increased the speed I just calmly asked the man “Oga Why did you pass here?”

Then he coldly answered “Because I choose to” Then I knew I was trapped. We were on a bridge so no one will hear even if I scream. We were on full speed. I had to make a choice. Either I jumped out of this car or I beg this people to let me go.

I knew begging them to let me go will be fruitless so I held my bag tightly …. And did the needful without thinking twice And I jumped off. I’d rather die that way than to die in the hands of those beasts.”