A picture circulating on Twitter showing Rihanna and Donald Glover hanging out on a set in Cuba has the set the internet on fire, and has fans trying to figure out why they’re together. However, as more details emerge, it becomes more and more clear just what’s going on.
According to further reports, the artists are in Cuba to shoot a film entitled ‘Guava Island,’ directed by celebrated music video director Hiro Murai. Vistar claims that the film will also feature Letitia Wright and Nonso Anozie.
Rihanna is currently finishing up her new album, which will reportedly be based on dancehall music, a pop-reggae fusion style born in her Caribbean roots. While no music from the album has yet been released, it feels like less of a coincidence that Glover’s musical persona, Childish Gambino , was announced to be performing at Rihanna’s Diamond Ball.
Seeing as Hiro Murai’s credits include a number of Childish Gambino music videos, including the acclaimed videos for “3005,” “Sweatpants,” “Sober,” and more recently “This is America,” it seems likely Rihanna and Gambino are working together on a music video for a single from Rihanna’s new album. 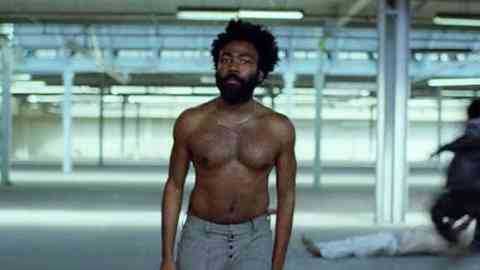 Further fan speculation says that the Diamond Ball would be the logical place to debut the single, in front of a live crowd with Gambino in tow. Neither Glover nor Rihanna have taken to social media to confirm or deny any rumors.