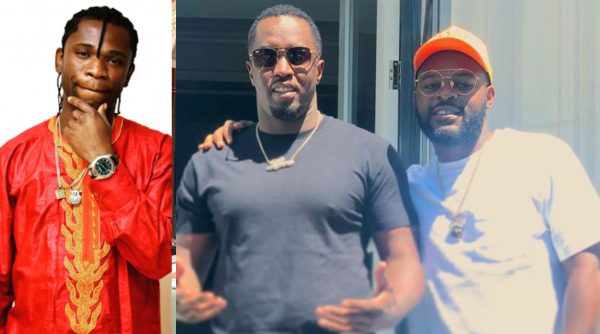 Speed Darlington who in a new post alleged that Nigerian artistes love copying him, shaded ‘comic’ rapper,Falzfor meeting with Diddy.

Speed Darlington who ‘has been inspiring Diddy’ since 2016, stated that he has not been rushing anybody rather they are rushing him. He wrote;
‘Omo nawa ooo. Them no get shame anymore. Someone tell me his not Igboman please. Well at least I lead in something them dey rush me I never rush them’

He has turned off the comment section of the post, as he suffered severe backlash for it. Falz meeting with Diddy, came after the ace American singer praised him for his ‘This is Nigeria’ video which was cover of Childish Gambino’s ‘This is America’. 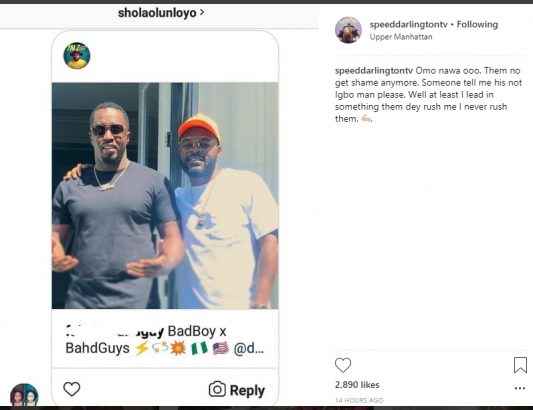 Falz who mirrored the concept used by the American musician/filmmaker,Donald Glover, used his song to address a number of societal issues in Nigeria.

“This is Nigeria” was released late on Friday, May 25th and many reacted since the release of the video, with some criticizing the video, largely due to the topical issues highlighted in it, while some praised the creative ingenuity behind the work. Reacting to the video, Diddy, who happens to be the owner of Revolt TV and Bad Boy Records, posted a short clip on his Instagram page and he wrote “#Nigeria LETS GO!”

In another post, Diddy praised Nigerian artistes for “changing the game”.

“Sending love to Nigeria. So many great, beautiful artist[es] changing the game,” he wrote.

‘This is Nigeria’ was produced by Wande Thomas and the video was directed by Prodigeezy. On the song, Falz raps about the menace of Fulani herdsmen, codeine epidemic among Nigerian youth, the much-panned special anti-robbery squad (SARS), internet fraud also known as ‘yahoo yahoo’, the Chibok and Dapchi schoolgirls abduction. The song also got the attention of MURIC, who demanded its ban.

BBNAIJA:I will Definitely Look Good As A Mum – Alex As She Rocked A...

Violette - November 10, 2019 0
Alex is gradually turning to the queen of colors as there is hardly any color she can’t pull off with her beautiful dark tall...

Johnson Olumide - March 21, 2020 0
Gambian Ghana-based actress, Princess Shyngle took to Instagram to blast her man calling him all sorts of unprintable. According to her, the supposed boyfriend  that recently bought her...

Violette - February 19, 2020 0
Award winning media personality and lifestyle vlogger, Toke Makinwa has taken to her Twitter account to give all women a push in their hustle...

Johnson Olumide - February 17, 2020 0
The World No 1 in Women Tennis Goes up against Her Old time rival Victoria Azarenka in the WTA BNP Paribas Open Final  in...

Bobrisky Goes Under The Knife As He Pleads To Nigerians To Pray For Him...

Violette - November 24, 2019 0
Popular Nigeria cross-dresser, Bobrisky has shared a video of himself as he's set to have a surgery. Bobrisky who is currently in Dubai with his...