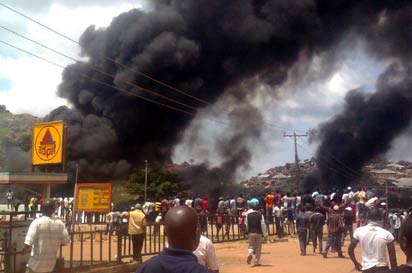 The entire city of Jos, Plateau State capital, was Friday morning thrown into pandemonium as residents closed shops and scampered for safety from their work places.

The development followed the killing of 11 persons at Rukuba road by unknown gunmen.

The assailants reportedly attacked the home of a famous woman in the area called Mama-Kogi at about 9 pm on Thursday, killing her and members of her family including Blessing, Ruth, Jonathan, Cynthia and Majesty. Others in the neighbourhood were also killed in the attack.

The development degenerated into violence in the area, and escalated to Gada-biu, where two other persons were killed, and Akpata, where another person was also killed, and indeed other parts of the city.

Security personnel have showed up in the affected areas battling to quell the violence. There is however palpable tension and fears that there might be resurgence of the violence after the Juma’at prayers.

The spokesman of the Military Special Task Force (STF) said he will issue a statement on the incident.

There are speculations that more persons may have been killed in the violence.

Violette - December 27, 2019 0
Singer and songwriter, Kingsley Chinweike Okonkwo popularly known as Kcee has taken to his official Instagram Page to flaunt his newly built mansion which...

Violette - March 30, 2021 0
Afrobeat singer and songwriter Davido has raised eyebrows on social media as he's been caught in what seems like a cheating scandal on his...

Violette - May 22, 2018 0
Controversial Nollywood actress, Tonto Dikeh is set to celebrate her birthday on June 9th, 2018 in grand style and she has already revealed her plans...

People are trying to kill me and my wife Regina Daniels – Ned Nwoko...

Violette - February 12, 2021 0
Popular Nigerian businessman, Prince Ned Nwoko, has alleged that his life and that of his wife, Regina Daniels, is in danger. The Punch reported that the...