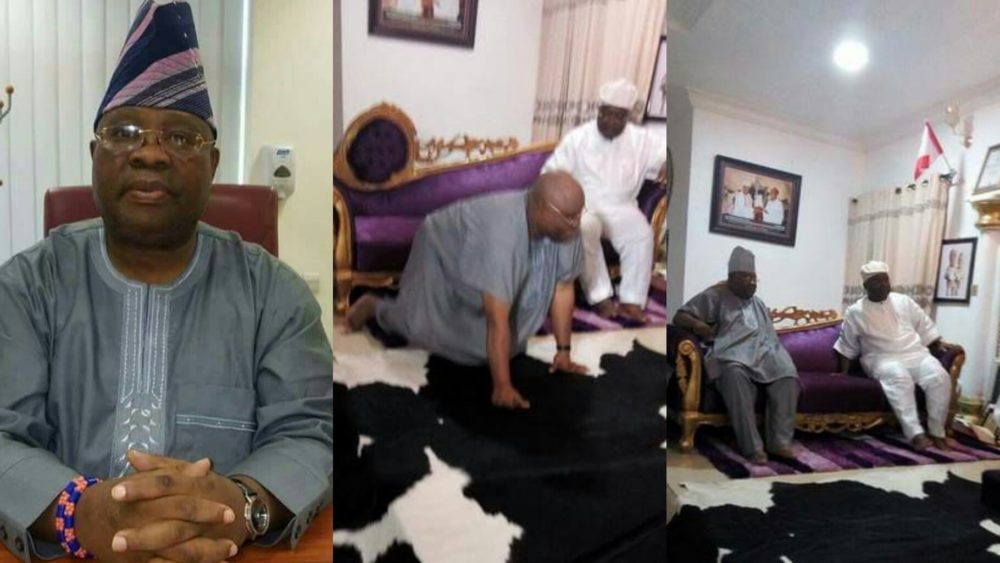 PDP’s candidate in the Osun State 2018 Governorship election, Ademola Adeleke is seen in a viral photo allegedly kneeling to beg Iyiola Omisore to support him for Thursday’s re-run.

Meanwhile, Atiku while predicting victory for the PDP ahead of Thursday’s rerun, called on Omisore to remember when PDP believed in him in 2014.

“I am confident PDP will win in Osun, no matter the ulterior motive of APC. I call on Senator Omisore to remember the PDP, which believed in him and gave him its ticket in 2014.

“I urge him to join with all who want to deliver Osun from negative change and support Adeleke.”

#BBNAIJA: Mercy Cries Out Says I Want My Old Life Back (Video)

Violette - November 27, 2019 0
Being a celebrity comes with a price to pay and it seems Mercy is already fed up with the sacrifice. The winner of this year's...

Violette - August 3, 2021 0
Popular Nigerian businessman, Mompha has reacted to claims that he was asked to maintain a low profile by the EFCC after the arrest of...

Violette - July 6, 2020 0
Keyshia mum will be a very proud woman at this moment when she bought her mum a Bentley. Going by her famous name Keyshia Ka'oir...

A Rich Teletubbie – DJ Cuppy claps back at trolls criticizing the way she...

Violette - January 11, 2021 0
Talented female singer and disk jockey DJ Cuppy has been forced to silence some trolls who tried to criticize the way she dresses on...

Johnson Olumide - December 20, 2019 0
An online Troll has just gotten a whole lot of attention after insinuating that Davido’s voice is like that of a Frog. This reply came after...