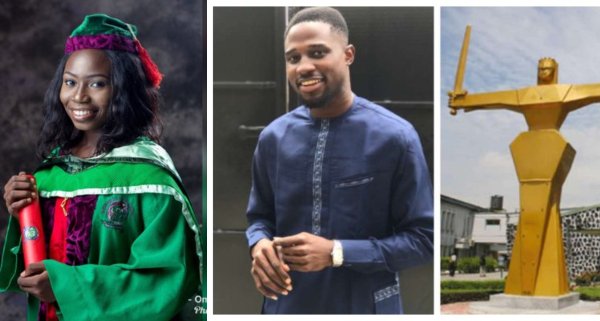 The whole Covenant University expulsion and sex scandal keeps getting twisted as an audio of Adooh Emmanuel allegedly admitting to being guilty has been released.

Adooh Emmanuel who took the institution to court and won is now caught up in fresh scandal as the audio of him admitting to being guilty of all the school accused him of.

Adooh Emmanuel claimed he was framed by Covenant University, CU, with the help of Omotayo Dada and Marilyn Effanga. He said the University claimed he had sex with one of the girls and as a result, they expelled him just before graduation, after he had spent 5 years in the institution.

He went on to claim he was innocent and was a guy who kept all the rules of the institution and never had time for Covenant University girls.

He eventually took the University to court and emerged victorious. Afterwards, he took to Twitter to call out the institution and the two ladies involved. He claimed Omotayo and Marilyn helped the school frame him up.

He later deleted his threat after Omotayo warned him to delete it because they are lies.

But Omotayo and Marilyn came out with their side of the story after Omotayo and her family began receiving threats.

Both Omotayo and Marilyn said Adooh had sex with Marilyn and later accused her of giving him an STI. But tests proved she was negative for any STI.

The university later saw the messages on both women’s mobile devices and invited them for questioning. They said Adooh begged them to cover up for him, which they tried to do, but they were threatened with expulsion and they eventually said the truth. This led to Adooh’s expulsion.

They also revealed that they have an audio of Adooh admitting to this without knowing he was being recorded.

Listen to audio below;