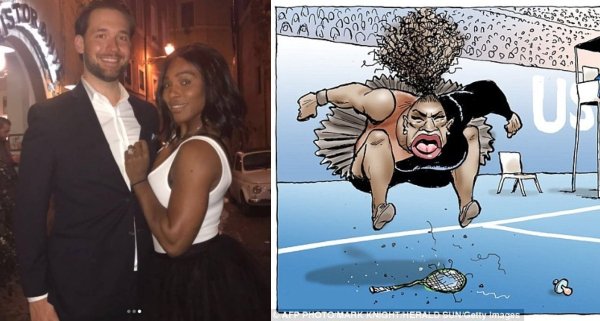 Alexis Ohanian has finally broken his family’s silence on the controversial Serena Williams cartoon drawn by Herald Sun cartoonist Mark Knight, depicting her meltdown at the US Open. 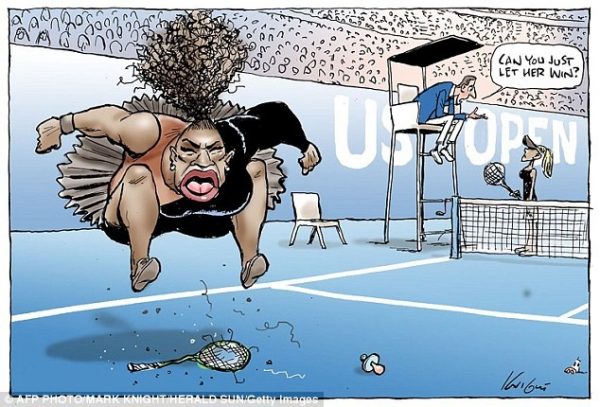 The Reddit founder, who married Williams last year, described the cartoon, drawn by the Herald Sun’s Mark Knight, as “blatantly racist and misogynistic”.

The tennis legend was depicted as a baby, angrily jumping on her smashed racket with a pacifier nearby in the cartoon.

In the background, her opponent Naomi Osaka is depicted as white with straight, blonde hair facing towards umpire Carlos Ramos who pleads: “Can you just let her win?”

I am truly perplexed to learn this editor of the Australian newspaper behind the blatantly racist & misogynistic cartoon of my wife is a “Male Champion of Change”  Is this supposed to be satire, too?

He also took a swipe at Herald Sun editor Damon Johnston who defended Knight at the height of the controversy saying:

“A champion tennis player had a mega tantrum on the world stage, and Mark’s cartoon depicted that. It had nothing to do with gender or race.”

Ohanian disagreed and linked to Johnston’s profile at the website for the Male Champions of Change, a body that describes itself as working with “influential leaders to redefine men’s role in taking action on gender inequality. It activates peer groups of influential male leaders, supports them to step up beside women, and drives the adoption of actions across private sector and government”.
The Serena Williams cartoon created an uproar in the US, with commentators saying it was an example of Australia’s “blind racism”. Knight, and his employer, launched an immediate defence, arguing it was a depiction of the tennis star’s behaviour and had nothing to do with race.They doubled down in Wednesday’s newspaper, printing a cover with the headline “Welcome to PC World”, that featured several of Knight’s cartoons with reasons why they could also be branded offensive.