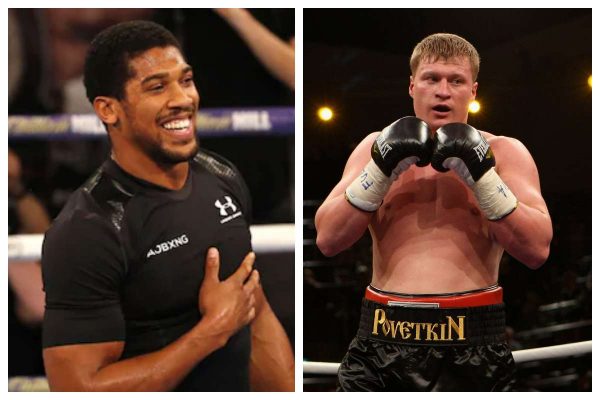 The family of Anthony Joshua in Sagamu will organise special prayer for him ahead of Povetkin fight.

Joshua’s family and the Sagamu Youth Council have said they will support him in his title defence fight against Alexander Povetkin at Wembley on Saturday.

Joshua, will put his IBF, IBO, WBO and WBA titles on the line against his WBA mandatory challenger Povetkin.

His uncle Adedamola told Punch Nigeria on Thursday that the boxer’s success is a pride to the family. He said they have organised a special prayer for the British-born pugilist to win the bout. He said;

“The town is livened up each time they learn that Anthony has a fight. The atmosphere has been expectant with the approach of the fight. Everyone wants to be a part of Anthony’s success. The family is praying for him to succeed because his success is a pride to us and the country at large.”

“We organised a special prayer for him at the family church and we believe that God will answer our prayers and grant him success. The Joshua family is solidly behind him.”

Spokesman for the Sagamu Youths Congress Ayodele Osho said the body would mobilise people in the town to watch the fight on the big screen and cheer Joshua on to victory. Osho said;

“Each of his fights has something different from the ones before them. This one is no exception. The Sagamu Youths Congress believes that we need to support our brother in such a time like this. We have mobilised people to watch the fight at a bigger venue. We have also created publicity for it so that the number of people who will watch the fight will be more than what we had the last time.”