The Queen of Pop ,Beyonce is definitely supporting the current queen of Rap music Nicki Minaj, in the ongoing feud between her and upcoming female rap artist Cardi B. 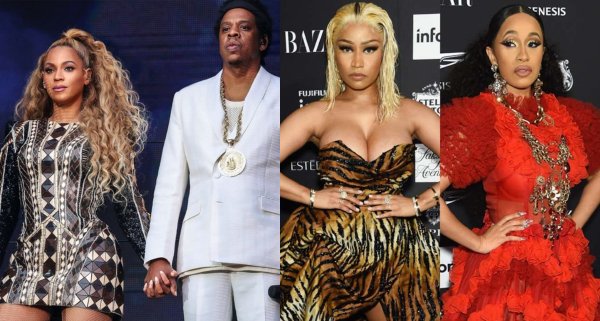 The Bodak Yellow crooner got into supposedly heated argument with Nicki Minaj at a Fashion show event last weekend which resulted into getting an elbow to the face while trying to hit Minaj with her red shoe.

Beyonce and Jay Z who used Nicki Minaj’s mugshot as their backdrop during their On The Run 11 tour, had Twitter users thinking they’ve taken sides. The speculation was further backed by Beyonce’s website which shared the photo.

While Beyonce left her fans thinking she is on Nicki Minaj’s side, it should be noted that they’ve collaborated on two songs.

This is coming after we reported that Rihanna unfollowed Cardi B on popular social media, Instagram.  The two female emcees (Nicki Minaj and Cardi B) have been beefing hard ever since they got physical at the Harper’s Bazaar ICONS bash a week ago.