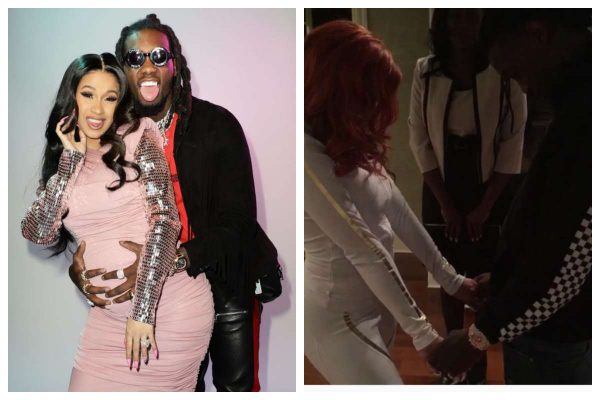 Cardi B Shares throwback picture of her secret wedding to Offset

The bodak yellow singer had a secret wedding some months back and today we have some official photos from the wedding as she U.S rapper took to her social media page to feed our eyes with never before seen photos from her secret wedding to U.S Rapper Offset of the Migos Rap group.

Since Cardi B announced in June that she and her baby daddy, Offset, had secretly married last year, people have been wondering when she was going to share a photo of the nuptials.

The new mom who welcomed the couple’s first baby, daughter Kulture, on July 11 took to Instagram on Thursday, where she shared a heartfelt snapshot from their clandestine nuptials, which they managed to keep private for nearly 10 months.

The entertainer captioned a sweet photo of herself, in a white and gold set of leggings and matching hoodie, as she held hands with her groom, who was rocking jeans and a black jacket.

See the first ever photo to hit the internet from the secret wedding below;

The adorable wedding ceremony was focused entirely on their love, and was conducted in their bedroom by a friend, because they knew they just wanted to be united immediately, as Cardi explained after news of their secret wedding broke in June.

“There are so many moments that I share with the world and there are moments that I want to keep for myself! Getting married was one of those moments!” Cardi wrote in a statement posted to Twitter on June 25.