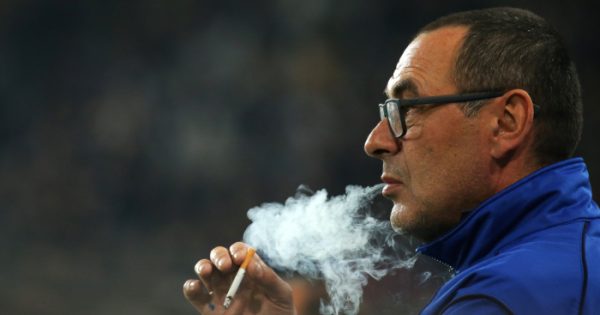 Chelsea boss, Maurizio Sarri has finally revealed the person that can make him to stop smoking cigarettes.

The Italian, however, said that his father, Amerigo is the only one person who can make him quit smoking.

“When my father (Amerigo) learned I had this offer from Chelsea, he told me to go to London, that it was the right thing to do,” Sarri told Il Mattino.
“He did ask me to stop smoking at least while I’m here.
“He is the only one who for five minutes can make me wobble in my convictions,” he said.

However, given the fact that smoking is prohibited inside English football stadia, Sarri has been forced to abandon his matchday habit by the Blues owner, Roman Abramovich, although the 59-year-old was pictured smoking in his technical area in the game against Newcastle.

Chealsea Football Club however created a special booth for Sarri to smoke anytime his team his playing at home, since he is not permitted to smoke within the stadium.

Sarri’s men, who are currently occupying the second position on the Premier League log, will face Cardiff City at Stamford Bridge this weekend.