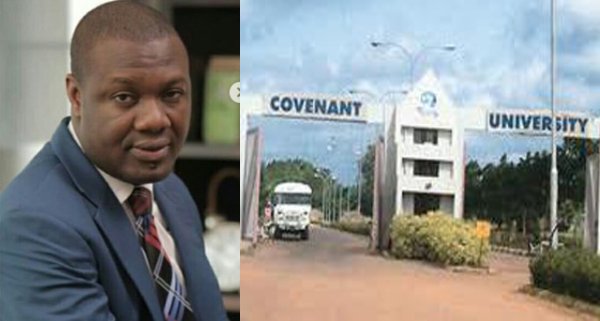 Covenant University Registrar, Dr. Olumuyiwa Oludayo, has been relieved of his job by the university management just after an expelled student of the school who won a court case, accused him of setting him up.

Following the scandal which has been a major topic on social media, Chancellor of Covenant University, Bishop Oyedepo who addressed students during the Thursday chapel service for 100 and 200 level students warned against having an “intimate ally”, a phrase used by the registrar in the leaked chats. He also revealed that Covenant University, currently, has no registrar.

The sack is coming just after we reported that the female students who were accused by male student Emmanuel Adooh, of making themselves available for the plan to expel him from the school before his graduation, reacted.

One of the female students, Effanga Marilyn, confirmed that she had sex with Emmanuel Adooh. Also corroborating the story, Omotayo Dada disclosed that after the report went viral, she began receiving threats.

Here are initial reactions to the Covenant University scandal after the report went viral below;

Adooh Emmanuel’s case vs Covenant University is another reason why rushing to call people names without facts/evidence should end with you. Imagine all the people who wrongly judged him. I’m glad he got justice. And to Mr Registrar & the school management, You should be ashamed.

Also @MuyiwaOludayo has to be the most dishonest person in the history of covenant university.

You sir are a cancer to that institution.

An accomplished cheat and manipulator

Covenant University graduates are exposing the atrocities of their lecturers and members of non academic staff on the TL.

You see the deep shits about Nigeria is either in a religious settings or not, we aren’t in anyway better.

You go to public uni, na hell, same with private

Reading that guy’s story. It feels so real!!!

Maybe I should tell the story of how I got suspended too.

It doesn’t matter now that I’ve risen above it but Covenant University threw me into the lowest point of my life for something that wasn’t my fault.