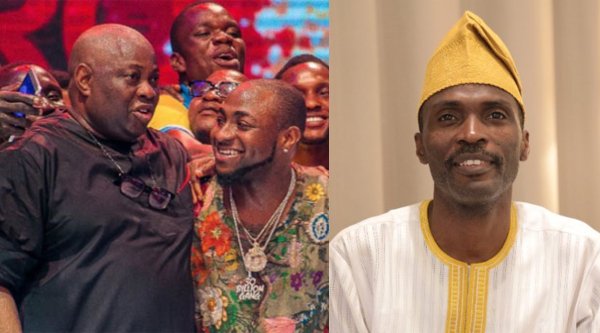 Dele Momodu and Kayode Ogundamisi drag each other on Twitter

Some days ago a FAKE news broke on internet, that Davido and some of his family members bank accounts had been put on lock down by the EFCC,which they debunked publicly.

It turns out that  the architect behind the news was renowned publicist and journalist himself Dele Momodu , which lead to various reactions on social media.

Among such reaction is from a London based journalist called Kayode Ogundamisi,whom also took to social media to drag the Ovation Magazine Boss.

The resultant effect got Dele Momodu to react and created a chain of  events on social media.

However reacting to the call out tweet, Dele Momodu went off on a rant. He wrote;

KO is a career activist, let him have fun…It has already. He can only deceive some people… KO lives off activism… KO thinks everyone is hungry… I have a good job and work very hard… I appreciate his plight…

KO has finally put his fingers in my mouth… I respect people on social media but KO has climbed the tree beyond the leaves… Let someone tell him to back off…KO is a big joke trying to use me to impress his masters but when I sit with Buhari, Osinbajo and others he’s trying to reach, he can’t come near the door… I earned my respect…

Don’t make your tongue sour tonight pls… He is one old man practising students activism in London… I’ve never attacked him but every now and then he attacks me and calls later, shamelessly…DAVIDO obviously has more sense than KO and the young man has since apologised publicly and like all decent people we have embraced openly but the likes of KO won’t promote peace since he thrives only in commotion…

I’m proud to drop the names of Buhari, Osinbajo and world leaders I’ve met in my private and official capacities; you can’t drop what do don’t have…Successful journalists have access to saints and sinners. Presidents are too busy to sit with just anybody… It is a reward for diligence and not jankaraism…

Kayode Ogundamisi replied, and he wrote;

@DeleMomodu I don’t take personal photographer’s to meetings 4 validation, thats your daily bread. I don’t DROP NAMES to VALIDATE my existence. Im not @iam_Davido‘ “boy” or a photo journalist in awe at every corrupt mbr of Nigeria’s ruling elite. U wont see me pandering to them.

Agbero! Tuto e danu! @DeleMomodu won’t dear call me his boy. He met me on the barricades. NOTHING personal against him. I understand he’s not pleased I was the first to expose his @iam_Davido @officialEFCC #FakeNews He’s free to back MESUJAMBA but his LIES wont go unanswered.

Blaqbonez calls out YBNL Mafia Over song lyrics, gets dragged by the Entire YBNL...

Johnson Olumide - January 24, 2018 0
Bella Hadid was the center of attention as she lead her fellow models down the runway for the Alexandre Vauthier spring summer 2018 haute...

Liam Hemsworth files for divorce after split with Miley Cyrus

Violette - August 21, 2019 0
After the two reportedly separated just after seven months of marriage, Liam Hemsworth has finally decided to seek for a divorce to officialize the...

“Doesn’t Take Much To Make Me Smile” – Tiwa Savage Reveals

Eddie Andy - May 30, 2018 0
Just a few hours after the mother of one was blasted by some fans for baring her bum in ripped bump shorts as she...

Johnson Olumide - March 21, 2020 0
Nollywood Star Actress Laide Bakare reveals no politician can buy her vote as she also reveals she’s even richer than some politicians, she made...