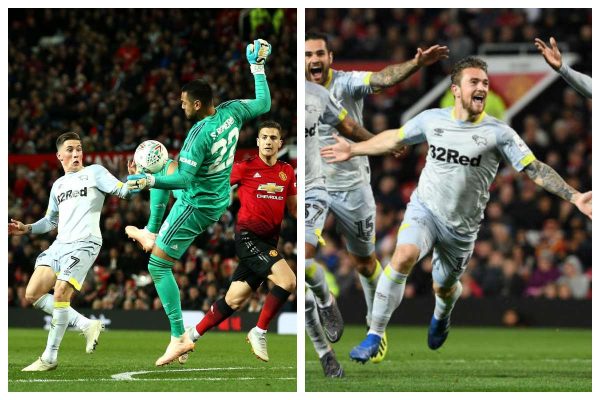 Things seem to be going from bad to worse for Jose Mourinho as Derby County kicked Manchester United out of the EFL Cup.

Manchester United failed to win at home for the third match in a row, as Derby County edged them in an EFL Cup penalty shootout.

Derby County increased the pressure on Jose Mourinho as Scott Carson denied Phil Jones to secure a shock 8-7 penalty shoot-out win over 10-man Manchester United after a dramatic 2-2 draw at Old Trafford in the EFL Cup.

Marouane Fellaini’s stoppage-time equaliser gave United – who had Sergio Romero sent off – a second bite, but after 15 successful penalties between the two sides, Jones saw his feeble effort saved by Carson.

Mourinho was facing his former player Lampard for the first time, and although United technically claimed a draw in 90 minutes, there was little doubt which was the better team at Old Trafford.

Even after going behind, Derby looked fearless, brave and full of ideas, attacking United whenever the opportunity came.

In the second half, Derby were even more effective, with Mourinho’s pragmatic tactics seeing the hosts struggle before going direct for the equaliser. The second goal flattered United, who ultimately got what they deserved.