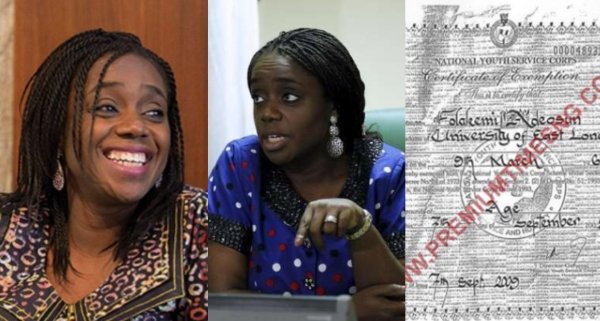 Nigerians finance Minister, Kemi Adeosun has reportedly resigned. Thought it is not clear when Kemi Adeosun submitted her resignation letter.

however Daily Trust gathered that her resignation followed the allegation of not serving the compulsory National Youth Service Corps, NYSC, and fraudulently obtaining a certificate that the NYSC have disowned.

According to sources, the Finance Minister felt that her position is becoming untenable and is hurting the President in the run up to the 2019 election.

Her resignation is coming days after Presidential spokesman, Garba Shehu, says Adeosun’s alleged certificate forgery is under investigation. Shehu who appeared on AIT’s breakfast programme, Kakaaki on Monday, September 10, 2018, assured Nigerians that the outcome of the investigation would be made public.

“The minister of information has spoken on the matter and a process is ongoing to address the allegations. When that process is complete, Nigerians will know the outcome,” Shehu said.

“Some people want a particular outcome and because they are yet to see this outcome, they are not happy. Give it (investigation) time. There is a process ongoing.

“It’s an allegation. If it is proven, you will see what will happen. The minister and the NYSC have spoken on the matter,” he added.

Asked on the length of time the ‘investigation’ would take, Shehu said:

“It is not for me to decide (the duration). I don’t have the full facts of the matter, so why the investigation is not out, I don’t know. I hope there will be an early outcome

“Don’t forget, these people, whose names are being dragged in the mud have families and relatives. We hope their innocence will be established,” he said.

The Presidential spokesman, however, failed to disclose which agency was investigating the matter as the Police had earlier said the Force would only investigate the forgery allegation if it was reported at the station.