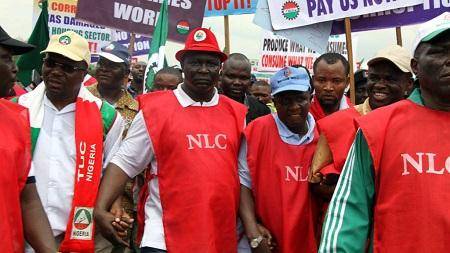 The Nigerian Labour Congress(NLC) on Wednesday insisted on going on strike after a tripartite meeting with the federal government ended in a deadlock.

The national leadership of Labour has instructed all workers to sit at home until further directives are given.
Labour had hoped that the meeting with the federal government would resolve the issue of increasing minimum wage but was disappointed when federal government only ‘assured’ that steps will be taken to act on their demands.
Many Nigerians have taken to social media to react to the situation. While some faulted the NLC for embarking on an action that will yield no good, others saw sense in the industrial action and urged government to act on Labour’s demand.
Here’s what they had to say
NLC is battling to squeeze a new minimum wage out of a government that pledged to give Nigeria a new minimum wage
Adams Oshiomhole, the leader of the ruling party, is a former NLC chairman but has never expressed his support for the new minimum wage