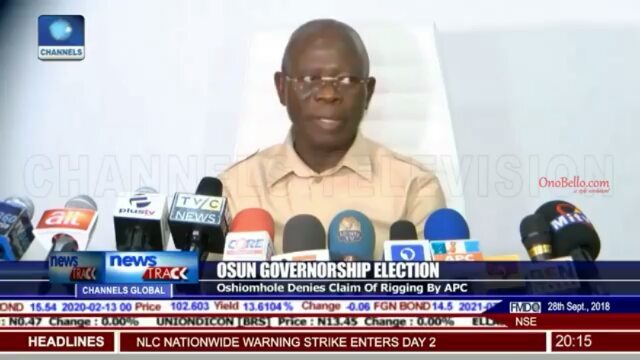 Adams Oshimhole who suffered a tongue slip during a press conference with Channels TV, said;

“I think that for democracy to flourish, only people who can accept the pain of rigging (sorry defeat) should participate in an election”.

“I think that for democracy to flourish, only people who can accept the pain of rigging (sorry defeat) should participate in an election”. – #AdamsOshiomhole #APC Chairman on Osun Governorship Election

Recall that after Osun election which had Gboyega Oyetola declared as its winner, the national chairman of the Peoples Democratic Party, PDP, Uche Secondus, said the All Progressive Congress, APC, revealed its ‘rigging template’ ahead of the 2019 general elections with the recent Osun State governorship elections.

Reacting to the loss of the PDP candidate in the governorship race, Senator Ademola Adeleke, Secondus alleged that the ruling APC, the Independent National Electoral Commission, INEC, and the security agencies revealed how the 2019 general election will be rigged.

“Because they cannot face the nation, having failed woefully in governance and having exhausted their propaganda and lies, they resorted to dubious and mischievous strategies that could give them undeserved victory as is the case in Osun and Ekiti states.

“Democratic community all over the globe are watching and we would stop at nothing in highlighting them until the will of the people are allowed to prevail.”

US, EU, UK observers who were very much around to also monitor the Osun rerun election, disclosed that voters’ intimidation, interference and harassment  was witnessed in the election that left APC’s candidate, Gboyega Oyetola, declared winner of the election.

An International Magazine rejected my photos for being too glamorous – Author, Chimamanda Adichie...

Ifeoma Ngozichukwu - December 14, 2021 0
Popular Author and feminist, Chimamanda Adichie has revealed how her photos were rejected by an international magazine for being too glamorous. The author stated that...

Johnson Olumide - February 17, 2020 0
Kendall Jenner as been in the news a lot recently, and it seems things have been turning out good for her and her junior...