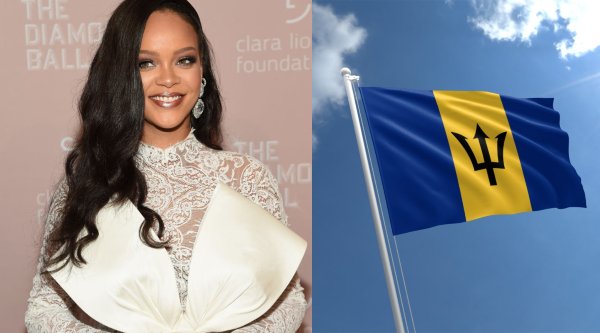 Rihanna whose full name is Robyn Rihanna Fenty, was appointed an ‘Ambassador Extraordinary and Plenipotentiary’ for her home country, Barbados on Thursday.

The singer who became a Barbados’ cultural ambassador in 2008, doing promotional work for its tourism ministry, now has an expanded role which includes promoting education, tourism and investment.

Prime Minister Mia Amor Mottley who honored the singer with the title, said;

“Rihanna has a deep love for this country and this is reflected in her philanthropy, especially in the areas of health and education. She also shows her patriotism in the way she gives back to this country and continues to treasure the island as her home.”

“She has also demonstrated, beyond her success as a pop icon, significant creative acumen and shrewdness in business. It is therefore fitting that we engage and empower her to play a more definitive role as we work to transform Barbados.”

Accepting the ambassadorial appointment, Rihanna who is now described as Ambassador Fenty by the Barbados government, said;

“Couldn’t be more proud to take on such a prestigious title in my home country. Every Barbadian is going to have to play their role in this current effort, and I’m ready and excited to take on the responsibility. I look forward to working with Prime Minister Mottley and her team to reimagine Barbados.”

The singer was born in Saint Michael in Barbados, and grew up in in the capital Bridgetown. She lived there until her teen years when she was discovered by an American record producer, who helped her break into the US charts.

Last year a street she used to live on was renamed Rihanna Drive in her honour. Rihanna can add this honor to her long list of achievements. In addition to serving as an ambassador, the artist has won nine Grammys, headed the annual Diamond Ball to benefit the Clara Lionel Foundation and launched a beauty line. She was also named Harvard University’s Humanitarian of the Year in 2017.

Nigerian Bishop Says There is a Clear Agenda to Islamicize the Christian Areas.

Violette - July 2, 2019 0
“THERE IS A CLEAR agenda: a plan to Islamicize all the areas that are currently predominantly Christian in the so-called Middle Belt of Nigeria.” Those are the...

Violette - July 2, 2019 0
Vice President Yemi Osinbajo today paid a visit to Google headquarters at the Silicon Valley in the US. He was received by Google CEO, Sundar...

Johnson Olumide - November 16, 2018 0
In Nigeria today, is well known that getting a job requires you knowing someone who knows someone in a top position with the ability...

Adedokun Moses - November 10, 2019 0
Nollywood actress, Ini Edo has shown her fans her curves and backside in a new picture she posted on Instagram. Ini Edo who has featured...

Chris Brown Gets DRAGGED by Rihanna Fans Over Thirsty Comments

Johnson Olumide - November 28, 2018 0
It's no secret that Chris Brown still wants to bang Rihanna. It's the most relatable thing about him, but her fans are understandably repulsed by...