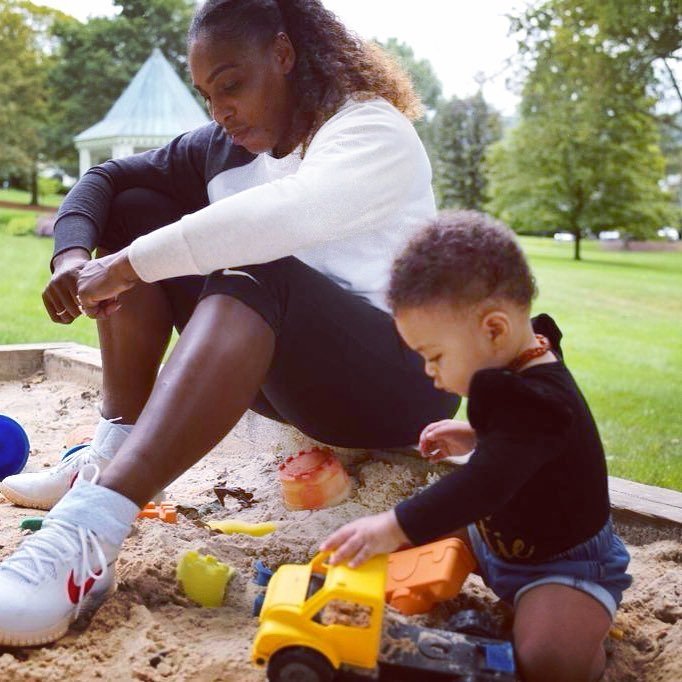 Serena Williams‘ superstar status doesn’t preclude her from the hurdles of working motherhood.

The pro tennis player spoke exclusively to PEOPLE Sunday in Los Angeles at the 5th Annual Imagine Ball Honoring Serena Williams Benefiting Imagine LA, where she opened up on how she is still learning how to divide her time between parenting 1-year-old daughter Alexis Olympia and juggling multiple career obligations.

“It’s been so hard balancing being a mom and starting my clothing line, as well as playing a professional sport!” said Williams, 36, at the event, presented by Val Vogt and John Terzian at The Peppermint Club. “However, it is the challenge that makes it fun!”

“I have spent every day with Olympia since she was born, and one of the latest challenges has been her teething,” added the mother of one. “I’m sure a lot of parents can relate. A milestone has been her walking — I get a good workout chasing her around the house!”

One secret to Williams being able to do it all? No sleep and working on the road, she told PEOPLE last month after launching her own eponymous clothing line in May that she described as “inspired by femininity and strength.”

Also in August, the tennis champ sat down with Today‘s Stephanie Ruhle and revealed that she’s taken comfort in the feedback she’s received from other moms on social media after missing her daughter’s first steps while she was away training for Wimbledon.

“When I missed Olympia’s walking, I posted about it and so many parents wrote in and said, ‘Don’t worry about it, I missed it too,’ ” Williams said in an interview that aired on the NBC morning show.

“I didn’t realize that it’s almost more normal to miss it than it is to make it,” she explained. “So I really kind of rely on everyone’s help out there. It’s been so, so amazing.”

The 23-time Grand Slam champion was honored at Sunday night’s Ball, where she gave a moving speech after joking about how she “finally got a trophy this year” following her shocking loss at the U.S. Open earlier this month.

“Thank you guys for coming out and supporting Imagine LA,” said Williams of the nonprofit, which aims to help end homelessness, poverty and neglect. “It’s so lovely to get to meet you tonight and hear your story. It is really so inspiring, and I hope you guys out there can understand how you, by being here tonight, are helping people. That’s what we have to do.”

She told PEOPLE exclusively of the Yetunde Price Resource Center, which was created in 2016 and named in honor of her late half-sister, “My older sister was a resource I could always go to and now even though she is not physically with us, she can still be a resource to so many others.”

“Providing victims with the resources to cope with, and heal from, senseless crimes is often something that is forgotten,” Williams added. “It leaves a scar that is often left open unless treated, and that is what we are trying to do with the Yetunde Price Resource Center.”

Johnson Olumide - March 21, 2020 0
According to news flying around, He is a turkey based Nigeria guy who goes by the name Tino Eddie Know as Apashe. He was in...

Violette - July 1, 2020 0
Pepper dem girls are out to enjoy the sunshine at the beach. The pepper dem girls have been giving their fans different vibes. Starting from Tacha,...

#BBNaija: “I am attracted to Maria’s personality, not Maria herself” – Whitemoney (Video)

Violette - August 25, 2021 0
Big Brother Naija season six housemate, Whitemoney has finally opened up on how he feels about Maria who seems to have become his rival...

Violette - February 2, 2021 0
Social media star and YouTube personality Kayla Nicole Jones, has finally welcomed her child with her fiancee and it's an adorable baby boy. It...