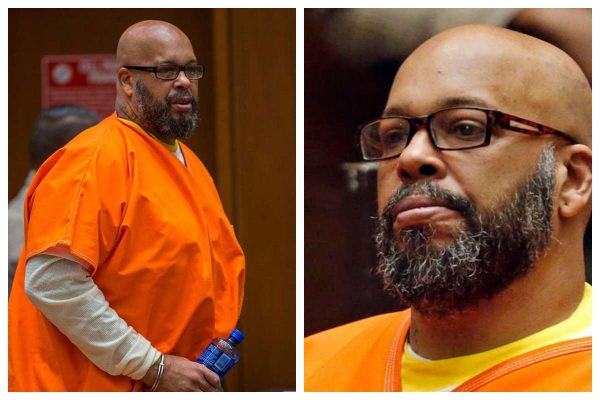 Rap mogul, Suge Knight has been sentenced to 28 years in prison after pleading no contest to manslaughter.

In January 2015, the former Death Row Records CEO was arrested and charged with murder after he was involved in a hit-and-run at a Los Angeles restaurant parking lot.

Knight allegedly got into a confrontation with two men while on the set of the N.W.A. biopic Straight Outta Compton.

According to prosecutors, Knight proceeded to follow the men to a nearby burger restaurant, where he ran over them with his car. One of the men struck, Terry Carter, died from his injuries. The other, Cle Sloan,, suffered injuries to his head and foot. Knight fled the scene of the incident before authorities arrived.

Knight, who turned 53 in April, had been facing the possibility of life in prison. His no contest plea came days before his trial was scheduled to begin on Monday (September 24). Knight will get credit for the three-and-a-half years he already served while awaiting the trial.

The Death Row Records founder made the plea to avoid charges of murdering one man and attempting to murder a second with his pick-up truck in Los Angeles.

He will be formally sentenced to 28 years in prison in October.

Under Californian state law, a no contest plea is the legal equivalent of a guilty plea.

Knight was previously sentenced to nine years in prison in 1997 after violating his probation stemming from an earlier assault charge. After being granted early release in 2001, he was sent back to prison in 2003 after assaulting a parking attendant.

BBNaija – Nini’s Fiance replies Instagram user who begged him to leave Nini for...

Ifeoma Ngozichukwu - November 24, 2021 0
An Instagram user earlier today begged the reality star's Fiance to leave her for her fellow housemate, Saga. It's no news that the two have...

Violette - November 10, 2019 0
Dabota Lawson is serving her fans and followers on Instagram some hot and sexy pictures of herself. The Business Woman and Model who is currently...

Cardi B shows off Offset‘s shoe closet that has 3200 pairs of designer shoes...

Violette - November 26, 2020 0
American singer and songwriter, Cardi B have continue showing fans how much she's blessed alongside her husband, Offset, whom she has shown off his...

Violette - May 12, 2020 0
On Thursday before the 5th annual Diamond Ball, Rihanna stopped by to have a chat with the Essence magazine. Capturing ambiguous phrases from the...